William D--A Jane Austen Education: How Six Novels Taught Me About Love, Friendship and the Things That Really Matter

Welcome William Deresiewicz to Darcyholic Diversions!
And The Continuing Countdown to the Decatur Book Festival...34 Days to Go! 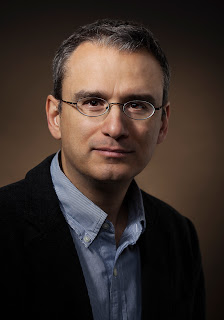 Hi, Darcyholics!  Today we visit with William Deresiewicz who will be joining us Labor Day weekend for the Decatur Book Festival--Jan Austen: Then and Now, and is one of three Austen Inspired Authors who will comprise a panel on one of the main stages.   I have been reading Bill's book, A Jane Austen Education: How Six Novels Taught Me About Love, Friendship and the Things That Really Matter and am finding it delightful.  William has truly written and published his own story of how he discovered Jane Austen and how she has changed his life.  I am looking forward to meeting him soon!

If you have not yet checked out the information about the Decatur Book Festival Events here is The DBF Event Link.  We have 24 Austen-Inspired Authors that have made a commitment to be a part of the event.  If you can make it to Decatur, GA over Labor Day let me know and I will be sure you have the information about our hotel room block (contact information can be found in the link).

If you have not read all of the posts for the month of June, there are still five authors with open drawings.  Check out the archives on the right and read posts from Pam Dixon, Marilyn Brant, Karen Aminadra, Jennifer Petkus and Amy Cecil and leave a comment.  And now an additional give away with William's post today.

Comments on William Deresiewicz's post will be included in a drawing for 2 copies of his book--US Canada only. And will also be entries into the monthly drawings here at Darcyholic Diversions.  Entries will be based on comments on blog posts; but additional chances will be given for joining this site, tweeting this post, Joining this site as a member via Google Friend Connect (GFC) (See the left hand column on the blog to join!), sharing this on Facebook or your blog, Friend me on Facebook, clicking 'like’ on Barbara Tiller Cole, Author's Facebook page, Join Darcyholic Diversions Facebook Page or following BarbTCole on Twitter.


A Jane Austen Education: How Six Novels Taught Me About Love, Friendship and the Things That Really Matter


I know, I know: what’s a guy like me doing on a blog like this? Everybody knows that men are supposed to hate Jane Austen, or at the very least turn their noses up at her. Too fluffy, too feminine: her novels aren’t really about anything, are they, except a lot of gossip and romance, chick-lit stuff.

Well, that’s what I thought, too, when I was a young man. How did I discover how wrong I was? Entirely by accident. I just happened to take a class, in grad school, that just happened to have Emma on the syllabus. Before long, my whole world turned upside down. I not only discovered how glorious Jane Austen is—how funny, how witty, how wise—I discovered how much I had to learn about life (about myself), and how far I had to go. Exactly like Emma! I guess you could say Jane Austen was my Mr. Knightley. 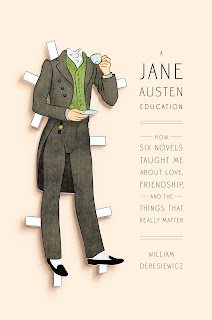 If you want to know the whole story—what I learned from the other novels, and where it all took me as a human being—you’ll find it in my book, A Jane Austen Education: How Six Novels Taught Me About Love, Friendship, and the Things That Really Matter. I will say this, though. One of the things she showed me again and again is that there is a different way to be man.
Like so many guys, my idea of a good conversation, back when I was 26 or so, meant holding forth about all the supposedly important things I knew: books, history, politics, the latest thing I’d read—whatever. But I wasn’t just aggressively sure of myself. I was also oblivious to the feelings of the people around me, a bulldozer stuck in overdrive, because it had never occurred to me to imagine how things might look from someone else’s point of view. Austen taught me to pay attention to other people, just like she did, and especially to what they might be feeling in relationship to me. Surprise, surprise, I really pissed a lot of them off. If you’re oblivious to other people, chances are pretty good you’re going to hurt them. Eventually, I understood that if I was ever going to have any real friends—or I should say, any real friendships with my friends—I’d have to somehow learn to stop being a defensive, reactive, self-enclosed jerk.

It took me reading Pride and Prejudice to find out how. Here was another heroine who seemed a lot like me, except instead of being an arrogant snob, Elizabeth Bennet was brilliant and witty and fun. I eagerly identified with her, took her side in every argument—which meant that about halfway through the novel, I fell with a loud thud into the exact trap that Austen had laid for me. Elizabeth, it turned out, was completely wrong about everything—which meant that I was, too.
My education came, however, when I noticed how she dealt with it. My brain had always been very good at figuring out what to say when someone called me out on something I had done. I would scurry around like a beaver, shoring up the walls of my self-esteem. Who, me? No, you must be wrong. That’s not what I meant. Was it really such a big deal? It was an accident. It’ll never happen again. That was the first time, I swear. Problem? What problem?
But Elizabeth did something different. She was strong; she was brave: she was just what men are meant to be. She looked her errors in the face, and no matter how much it hurt, she owned up to them:
“How despicably I have acted!” she cried; “I, who have prided myself on my discernment! I, who have valued myself on my abilities! How humiliating is this discovery! Yet, how just a humiliation!”
Humiliation, it turned out, the most emasculating emotion of all, was exactly what I needed to let myself feel, when I had it coming to me. Our egos, Austen was teaching me, prevent us from owning up to our mistakes, and so our egos must be broken down—exactly what humiliation does, and why it makes us feel so worthless.
I had come to graduate school with a very different idea about what it means to get an education. It meant knowing things, knowing facts. And the purpose of knowing things, in a strangely circular way, was simply to “be” educated, to be able to pride yourself on being a “man of culture” (and feel superior to those who weren’t).
Knowledge, culture, ego: that was pretty much the formula. But now I was learning a new idea—about education, but also about being a man, “of culture” or otherwise. You didn’t have to be certain, I now saw, to be strong, and you didn’t have to dominate people to earn their respect. Real men were not afraid to admit they still had things to learn—not even from a woman.
Years later, I was interviewing for a job as an English professor. At the very end, the head of the search committee posed a question that she must have been dying to ask the whole time. Glancing down at my cv—I had written my doctoral dissertation on The Novel of Community from Austen to Modernism, published a book entitled Jane Austen and the Romantic Poets, and was planning a study called Friendship: A Cultural History from Jane Austen to Jennifer Aniston—she asked, “So what’s with you and Jane Austen?” 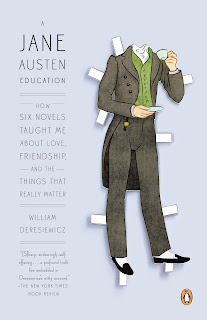 I thought for a second, then blurted out a phrase that had been rolling around in my head for a long time. “Well,” I said, “sometimes I feel like everything I know about life I learned by reading Jane Austen.” Half the people in the room simultaneously shouted out, “That would make a great book! You should write that!”
So that’s what I did.