Treats Not Tricks This Halloween: An Interview with Victoria Kincaid


Treats Not Tricks This Halloween:

An Interview with Victoria Kincaid 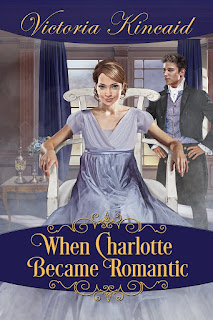 A Pride and Prejudice Variation:  When Charlotte Becomes Romantic

In the original Pride and Prejudice, Elizabeth Bennet’s friend, Charlotte Lucas marries the silly and obsequious clergyman, Mr. Collins.  But what if fate—and love—intervened?
Desperate to escape her parents’ constant criticism, Charlotte has accepted a proposal from Mr. Collins despite recognizing his stupid and selfish nature.  But when a mysterious man from her past visits Meryton for the Christmas season, he arouses long-buried feelings and causes her to doubt her decision.
James Sinclair’s mistakes cost him a chance with Charlotte three years ago, and he is devastated to find her engaged to another man.  Honor demands that he step aside, but his heart will not allow him to leave Meryton.  Their mutual attraction deepens; however, breaking an engagement is not a simple matter and scandal looms.  If they are to be happy, they must face her parents’ opposition, Lady Catherine’s disapproval, dangerous figures from James’s past...and Charlotte’s nagging feeling that maybe she should just marry Mr. Collins.
Charlotte had forsworn romance years ago; is it possible for her to become romantic again?
Posted by Barbara Tiller Cole at 8:27 AM 10 comments: