(Fourth In the Series) 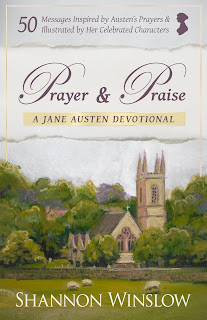 Prayer And Praise on Amazon Here

Did you know that Jane Austen wrote prayers in addition to her six classic novels? She was not only a woman of celebrated humor, intellect, and insight; she was a woman of faith.

Prayer & Praise is a treasure trove of thought-provoking messages inspired by the lines of Austen’s three preserved prayers. Atop a solid foundation of scripture, these 50 devotional segments (each finishing with prayer and praise) enlist familiar characters and situations from Austen novels to illustrate spiritual principles – in creative, often surprising, ways!

Which one of Austen’s characters developed a god complex? Who was really pulling Henry Crawford’s strings? Where do we see examples of true repentance, a redeemer at work, light overcoming darkness? With a Biblical perspec-tive, Austen’s beloved stories reveal new les-sons about life, truth, hope, and faith.