Another Interview Over Tea With Shannon Winslow and Mr. Collins

Another Interview Over Tea With Shannon Winslow and Mr Collins 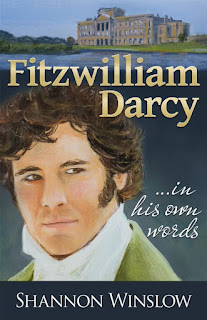 (It’s been awhile since I have visited with you all but I could not let an opportunity to visit again with Shannon Winslow and Mr Collins go by!   Thank you Shannon for spending some time here at Darcyholic Diversions and if any of you have an upcoming new release please send me a message on Facebook or email me.  I am having a socially distanced reopening of my blog.)

It has become a tradition that, with the publication of each new book, I sit down for an interview with Mr. Collins (now Sir William Collins). Did you know that, after his run as a legendary literary figure, he turned his talents to a new career as a talk-show host? It’s true. But he and I have not always been on the best of terms, I’m sorry to say. The awkwardness stems from the fact that I made his character’s early demise my top priority as a writer. In fact, Mr. Collins expired in the very first chapter of my very first novel (The Darcys of Pemberley). I’m afraid he has never quite forgiven me for that, as you may be able to tell from the tone of our recent interview:

Collins: Welcome once again to Meet the Author, Ms. Winslow.

Winslow: Thank you for having me, Sir William. I always look forward to our little chats, don’t you?

Collins: [coughs and mutters] Indeed. I might have described my anticipation of the event somewhat differently, but that is neither here nor there. You have a new book out, which is the material point. Fitzwilliam Darcy in His Own Words.

[He holds book up while promotional image of book and author displays on mammoth screen in background. Polite applause.]

Collins: So it appears you’ve come back to Pride and Prejudice for this latest book.

Winslow: That’s right. I love all Jane Austen’s novels, and my goal is to write at least one book related to each. So far I have Leap of Hope for Mansfield Park, The Persuasion of Miss Jane Austen for Persuasion, and Murder at Northanger Abbey for… Well, you get the idea. Still, Pride and Prejudice is my favorite and I suppose it always will be. So I’ve come back to it once again, as you say, this time with a book from Mr. Darcy’s point of view.

Collins: I hope you have not gone in for the popular mania of turning everything in that classic story upside down and inside out – zombies, time travel, body swapping and I know not what else. I find such creative excesses most distasteful.

Winslow: Then, you haven’t read the book? …oh, what was I thinking; of course you haven’t. In any case, I am sorry you feel that way, Sir William. Why, I myself have written a time travel novel – Leap of Hope, that I mentioned a moment ago – and it was a great fun! But as it happens, this new book only adds onto what Miss Austen originally wrote; it doesn’t change it.

Collins: Thank heaven for that at least.

Winslow: Actually, that’s true of all my Pride and Prejudice novels, as you may recall. I take a kind of “world-building” approach by adding on to the established framework.

Collins: Yes, I do recall how you added on, [then, continues indignantly] but I more particularly recall how you subtracted, Madam! Eliminating a beloved character – a man of the church! – without so much as a second thought.

Winslow: [placatingly] Now, now, Sir William, I thought we agreed to put that sore subject behind us once and for all. And you must admit that what I said is true; I didn’t change anything in Austen’s original novel. In the case you’re thinking of, I added on – uh, or subtracted – by writing my idea of what happened afterward.

Collins: Pardon me, Ms. Winslow, but such a wound, such a painful blow cannot soon be recovered from.

Winslow: It has been nearly ten years, you know, since The Darcys of Pemberley was published. And we have both moved on, have we not?

Collins: I suppose, well… Now, where was I? Oh, yes. It occurs to me that you might find it limiting, your philosophy of not altering the facts of Pride and Prejudice for your novels, as others have done.

Winslow: Oh, no! Not at all. At least not so far. With the possibility of sequels and prequels, expanding on minor character’s stories and different points of view, there’s plenty of scope for the imagination.

Collins: So which is this new book? Prequel, sequel, or what have you?

Winslow: Really, Sir William, didn’t you read any of the press releases my publicist sent over? Or even the brief blurb on the back cover?

Collins: I am a very busy man, Ms. Winslow! My time and attentions are highly in demand. Please just answer the question.

Winslow: Yes, of course. I suppose Fitzwilliam Darcy in His Own Words could be considered partly prequel, since the first chapters take place before the timeline of Pride and Prejudice – Darcy giving us glimpses into his early years, his relationships with his parents, his sister, a young Wickham. Then there’s the “missing scenes” aspect of the book. For example, Jane Austen tells us through Darcy’s letter to Elizabeth that he went to Ramsgate just in time to save Georgiana from Wickham’s dastardly plot, but Austen doesn’t actually show us that scene. I do, as well as several others, like Darcy’s showdown with Lady Catherine. Mostly, though, this is a different-point-of-view book. We see everything from Darcy’s perspective: what’s going on in his life and in his head before, during, and a bit after the scope of the original story.

Collins: That’s all very well, I’m sure. But… [pausing and finally looking at the back of the book] What is this I see here about somebody called Amelia? I do not remember any person of that name in Miss Austen’s novel, so how can that be, when you claim not to have changed anything?

Winslow: Amelia Lambright is not a change but one of my little additions – a fairly major addition, actually. She, and Darcy’s interactions with her, fit seamlessly into the story, only we must consider that it all happens behind the scenes of the original – “off camera,” so to speak. There’s a lot of time unaccounted for when Darcy is missing from the page, you know, when Austen doesn’t tell us where he is and what he’s up to. When I set about filling in those blanks, it turned out he was up to quite a bit!

Collins: With this Miss Lambright, I gather.

Winslow: Yes, with her, with Georgiana, Bingley, Colonel Fitzwilliam, Anne and Lady Catherine. And of course Elizabeth. The readers would not be pleased if I neglected to give them plenty of Darcy and Elizabeth!

Collins: Of course not. So the whole original cast is back? Even those… One hesitates to call them “minor characters,” for they too may play critical roles. Let us say the ones less prominently featured?

Winslow: Well, hmm, let me think. There wasn’t much for Mary or Kitty or the Lucases to do, but… Yes, I believe pretty much everybody else got into the act… Oh, I see what you mean. Be assured that Mr. Collins plays an important role in the story.

Collins: [sardonically] And no dying involved this time? No choking on mutton? [shudders] I have not been able to eat the stuff since you told me. Even the smell of it…

Winslow: As I said, I changed nothing in the original story; Mr. Collins is alive and well to the last.

Collins: I’m relieved to hear it.

Winslow: Perhaps knowing that will give you the courage to actually read this novel someday.

Collins: Ms. Winslow, I assure you that it is not a want of courage that has prevented me in the past, but a want of time and inclination. But speaking of time, I’m afraid we are out of it. My thanks to you… [turns towards camera] and especially to my devoted viewers for joining me today here at Meet the Author. Until next time, good-bye and good reading!

[The tepid response from the studio audience, which is necessarily augmented by canned applause, is acknowledged by Collins with a self-effacing bow. The director then gives the all-clear and the house lights come up. Removing his microphone and handing it to a ready assistant, Collins turns to his guest again.]

Collins: What do you mean to write next, Ms. Winslow? I assume there will be more… and consequently more of these little visits between us.

Winslow: There will be if I have anything to say about it! As for what I’ll write next, I’m considering that, if this newest book does well, I may go on to write a whole series: Colonel Brandon in His Own Words, Mr. Knightley in His Own Words. I haven’t written anything for Sense and Sensibility or Emma yet, you know, and I did really enjoy writing from the hero’s point of view this time.

Collins: So you are interested in heroes? Might I suggest that William Collins in His Own Words would make a spell-binding tale. [Gestures with his hand as if tracing a movie marquee] His inspirational rise from humble beginnings to fame and fortune. That sort of thing. Perhaps I might even be persuaded to act as consultant on the project.

Winslow: Or at least to read the book?

Collins: As you say.

Winslow: I will take that under advisement.

Fitzwilliam Darcy, In His Own Words

What was Mr. Darcy’s life like before he met Elizabeth Bennet? – before he stepped onto the Pride and Prejudice stage at the Meryton assembly? More importantly, where is he and what is he doing all the time he’s absent from the page thereafter? And what is his relationship to a woman named Amelia?

With Fitzwilliam Darcy, in His Own Words, the iconic literary hero finally tells his own story, from the traumas of his early life to the consummation of his love for Elizabeth and everything in between.

This is not a variation but a supplement to the original story, chronicled in Darcy’s point of view – a behind-the-scenes look at the things Jane Austen didn’t tell us. As it happens, Darcy’s journey was more tortuous than she let on, his happy ending with Elizabeth in jeopardy at every turn in his struggle between duty and his heart’s desire, between the suitable lady he has promised to marry and the woman he can’t stop thinking about.