Cassandra Grafton: In Vain I Have Struggled

Cassandra Grafton: In Vain I Have Struggled
Cassandra's title is very appropo to my absence from this blog for too long of a period of time.  Surgery, a job loss, a job search and a new job that has been a bit like jumping on the Bullet Train even though it did not stop for me has keep me absent from Jane Austen Inspired literature for entirely too long.  I am VERY grateful to be back and welcome the very very very patient Cassandra Graton to Darcyholic Diversions today.  Cassandra is offer a set of all 3 volumes of A Fair Prospect, ebook or paperback, open internationally to a lucky commenter!  So don't forget to take the time to comment below her post!  Thanks for all of your notes, calls and emails!  Barbara

Barbara, thank you so much for allowing me to come along and do a post on your website. It is much appreciated. In preparation for my visit, I had a very enjoyable time thinking about Mr Darcy (who wouldn’t?!) and how he has impacted on my life, and I thought I would share some of that with your readers who are, after all, the experts on the matter!
~~~
“In vain have I struggled. It will not do. My feelings will not be repressed. You must allow me to tell you how ardently I admire and love you.” 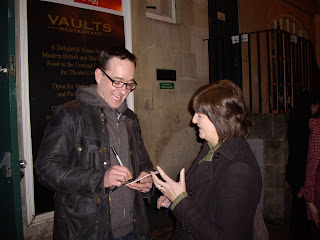 I can still remember hearing those words read aloud in a classroom in Shropshire back in the 1970s. It was the moment when I first sat up and took proper notice of Fitzwilliam Darcy, for I think I was almost as shocked as Elizabeth Bennet when I realised he was proposing!
For Jane Austen – and this was my first venture into reading any of her works – had mislead me as surely as she had her heroine into believing Mr Darcy to be a proud and disagreeable man, his behaviour as unlike a suitor as I could ever imagine (this from the lofty experience of fifteen years of age!)
Back in the classroom, the story continued (we each in turn had to read a few pages aloud before we would stop for some teacher-led discussion on what had just transpired), and how thankful was I that it was not my turn during that challenging scene! I listened enraptured as my eyes devoured the corresponding words in the book on my desk, completely bewitched.
I spent the remainder of that day’s classes with my attention in splinters, and as soon as I got home I raced upstairs, threw myself on my bed and continued to read, completing the rest of the story without a pause.  Afterwards, I lay on my bed, the book grasped in my hand in probably a greater state of shock than Lizzy may have felt after reading Darcy’s letter, except I knew one thing that she did not at that moment: I was in love with Mr Darcy.
At the time of my discovery, the only visual interpretation was the 1940 MGM production starring Laurence Olivier as the hero.  I happened across it by chance one Sunday afternoon many years ago, and once I had recovered from the sight of the crinoline-skirted Bennet sisters, I found myself drawn in by the actor’s portrayal. Was it a faithful retelling? It is so long since I saw it, I truly cannot remember – the only thing I do recall with clarity is Mr Darcy himself.
Imagine, therefore, my delight in 1980 when the BBC began to air a new adaptation of Pride & Prejudice! The lead actors were unknown to me – David Rintoul and Elizabeth Garvie – but the production, despite the stiffness that characterised the studio-based filming in those days, was charming and a pretty faithful adaptation.  I enjoyed it immensely, but I wasn’t overly drawn to Rintoul in the role. He portrayed the stiff and correct Darcy very well, and when he bumped into Elizabeth at Pemberley he was adorable, but somehow he did not have the ability to make me swoon. However, it was a long way from the 1940 film, and I happily purchased the boxed video set and re-watched it over and over.
There was a long gap between productions then; fifteen long years before the BBC delivered what turned out to be the definitive adaptation. 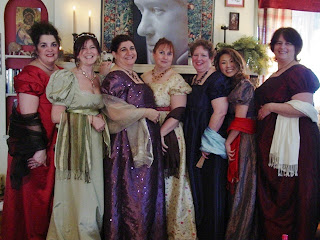 Who will ever forget the first moment they watched the 1995 series of Pride & Prejudice?  I can still perfectly recall the anticipation every Sunday evening as each episode aired, and what a delight it was from the moment the opening credits began. The earlier 1980 production faded from my mind, obliterated by a tidal wave as a half-dressed Mr Darcy plunged into Pemberley’s lake! It ran from the September through to the October of that year, which dovetailed perfectly with the seasons for the book’s opening and closing scenes, and has been enthralling viewers ever since.
It was ten years before another Darcy came along to tug at my heartstrings – and, oh my, did he tug! The 2005 film has its critics, for a variety of reasons. However, I still absolutely love that film, not only for the story, but also the stunning cinematography, beautiful score and the sheer romance of it all.  (It was the official forum for this film that led me to discover Jane Austen on the Internet, through which I have met some wonderful people, many of whom are now personal friends, and this led me to Jane Austen inspired fan fiction and ultimately to writing my first book.)
As a child I was introverted by nature and shy around those I did not know well. Even in adulthood, I often lack the confidence to do anything ‘different’ being uncomfortable doing anything that makes me feel out of my comfort zone – I even hate just the simple act of having my photo taken, especially in front of other people. Therefore, when reflecting on how Mr Darcy had impacted my life, I began to realise that I had, in recent years, done some things that I would never have dreamed I would do back in that classroom in 1978, and I thought I would share three of them with you.
1.  I never in my life saw anything more elegant than their dresses
In 2008, one very dear, and talented, friend made some beautiful Regency dresses for a group of us, and when 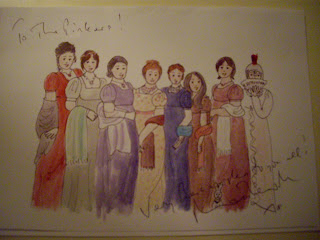 we all got together for a few days of Darcy-led indulgence, the time came for everyone to put on their new attire and have photos taken. Thanks to another dear friend making me a rather effective Cosmopolitan, I buried my nerves over this ‘dressing up’ and then posing for photos pretty well, aided by the knowledge I was amongst people I loved and trusted, all of whom were also wearing Regency clothing!

2. Mr Darcy is all politeness 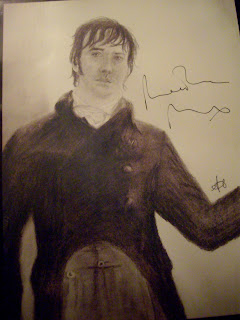 I have never been someone who would even think about going to a Stage Door and speaking to someone famous, no matter how much I admired them.  However, Mr Darcy, as we all know, is a powerful attraction, and in February 2010 I happened to be in Bath celebrating my birthday with my husband when Matthew Macfadyen was on stage at the Theatre Royal in Private Lives. I did manage to pluck up the courage to speak to him, and he signed a drawing of him as Darcy, done by a friend, for me. Furthermore, he responded to a letter I left him at the theatre by signing a picture I had enclosed (drawn by another talented friend), representing we ladies in our Regency dresses.
3.  But, Lizzy, you can tell us whether it is like or not 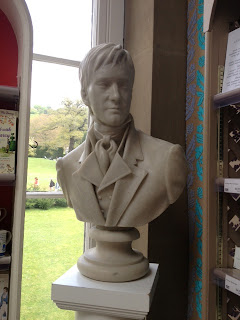 If you saw the 2005 film of Pride & Prejudice you will recall that, instead of looking at a portrait of Mr Darcy when she tours Pemberley, Elizabeth actually comes face to face with a marble bust of him in the sculpture gallery (filmed at Chatsworth House in Derbyshire).  For a few years after the film’s release, the Estate kept the bust on display, initially in the sculpture gallery itself, then later as part of various film location exhibitions. When the house opened for the 2010 season, however, it was discovered that the bust had been removed, was at that time stored in one of Chatsworth’s many basements and was unlikely to see the light of day again unless, to quote a member of staff when questioned, “there is enough demand for it”.
What is a Darcyholic to do? Well, for the love of my many friends who had yet to travel to England and have the chance to see this piece of art (yes, I know it’s just a film prop, but this is Mr Darcy!), I leapt – figuratively speaking – into action and set up an online petition to have it reinstated (something else I have never done before, or since). I wrote a long letter to the Chatsworth Estate asking them to reconsider along with the petition, which had gathered 300 signatures from around the world within a week. Radio silence greeted this, but about a month later, when I was least expecting it, a phone call came from Chatsworth. They wanted to reassure me that they had taken the letter and the petition seriously and the delay was merely over making a decision on where to place the bust. It now sits proudly in the Orangery, the gift shop that is adjacent to the sculpture gallery and, several years on, I am delighted to say that it is still there (I know because I check every time the house opens for the new season!)
Pride & Prejudice continues to draw me in. Whenever I am in a second-hand bookshop (which is often!), I seek out and purchase old copies of the book. I even have one that was released to coincide with that first film with Laurence Olivier in!
At home, I still have the old exam paper with the questions on Pride & Prejudice hidden away in a box in the loft, along with my class books containing all my essays and notes. Sometimes, if I am up there looking for something, I will drift towards that dimly-lit corner of the attic and take them out, dusting off the papers and book covers and remembering that first time – the moment when I fell in love with Mr Darcy.
~~~
The Regency dresses were all made by a good friend who offers beautifully made items for sale at Pemberley Dreams on Etsy.  http://www.etsy.com/shop/pemberleydreams 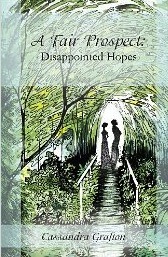 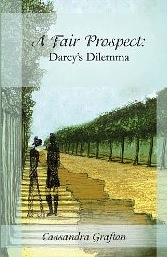 Cassandra’s story, A Fair Prospect, a re-telling of Pride & Prejudice, is told across three volumes. Volume I (Disappointed Hopes), Volume II (Darcy’s Dilemma) and Volume III (Desperate Measures) are all available now at the usual online bookstores in paperback and in all eBook formats in the Kindle store or at http://www.smashwords.com 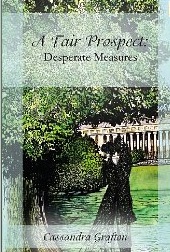