Veronica of Dark Jane Austen: Into the Darkness for Redemption

Spend Christmas With the Darcys
by Sharon Lathan 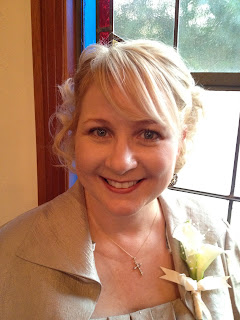 (I am very grateful to have Sharon Lathan here to share with us in this continuing Holiday Austen Inspired Novel Feature!  Enjoy! Sharon is Giving away 2 eBook's of her novella, so comment to win!)

I consider myself extremely fortunate in that I spend all year with the Darcys of Pemberley. Nearly every day I write of their life together, living with them in my imagination as I create their future. It is wonderful to share their joys and sorrows, ride along on their travels, and listen in on their conversations. Together we have pleasantly passed uncounted hours recounting the events both big and small that compose life for Fitzwilliam and Elizabeth Darcy. Listing my ultimate top ten would be tough, but I know without a doubt their Christmas celebrations would top the list.

When I was assigned the task of writing a Darcy Christmas-themed novella, I immediately recognized that limiting myself to just one Christmas wouldn’t suffice. Instead I grasped onto the assignment as a fabulous opportunity to envision the Darcy family as they traverse the corridors of time, using my favorite holiday as the perfect backdrop to catch glimpses.

With that basic concept in mind, I then had to ask myself several pertinent questions. How did I imagine their marriage and family beyond the first two years I had already written? How many children would they have and what would be their personalities? Just in case I wrote the Darcy Saga for years and years, how specific should I be in this novella? Which Christmases should I write and what would they be doing? What was the common thread between them? Would one character be the focal point? 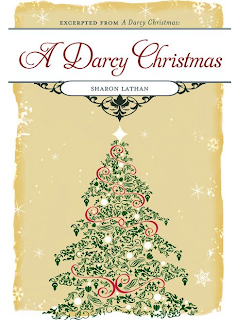 There were many other questions, and I changed my mind a few times, but in the end I was very pleased with the results. Through nine vignettes, A Darcy Christmas spans twenty-plus years and centers mainly on Mr. Darcy as he evolves from lonely bachelor to contented husband and father of a thriving family.

Perhaps you have wondered about Christmas traditions during the early decades of the 1800s and how the Darcys would honor the special season. Or maybe you just want more of the Darcys! I can relate to that sentiment. Whatever the case, A Darcy Christmas is for you! Here is a small snippet to spark your Christmas spirit --

Michael snorted, muttering disdainfully, “Everyone knows what a clog is.”
Noella flared, piercing her brother with a withering glare. “I bet you did not know it! You are more stupid than me!”
“Am not!”
“Are too!”
“Children,” Darcy interrupted the familiar exchange with his patented tone: calm and quiet but with a firm edge that clearly conveyed the penalty for disobeying. “You will refrain and hold your tongues. It is Christmas Eve and we will have a lovely family time. Understood?”
“Yes, Papa,” they intoned meekly, ducking their heads. Darcy, however, knew his children well and did not miss the smirk on Michael’s lips or the elbow nudge Noella gave her brother.
Neither did Alexander. “Bets on how long peace reigns?”
He spoke in French, his father responding in the same language, “Five minutes? Ten?”
“Ten what?” Michael asked.
“If you attended to your French lessons then you would know more than merely counting to ten,” Darcy answered in English, reaching to pinch his second son’s nose.
“I can count to more than that,” he countered churlishly. And then he brightened, turning his crooked grin upon Alexander. “You win in languages, brother, but I can still wrestle you to the ground in seconds.”
Alexander shrugged, unconcerned. Nor did he deny it since it was the truth.
The family held a tradition started upon Michael’s first Christmas Eve. Alexander joined them in their bedchamber while Lizzy nursed Michael, Darcy cuddling his two-year-old son against his chest and opening a book to read a story. Both boys fell asleep to the comforting sound of Lizzy humming carols and Darcy reading poetry, neither parent having the heart to return them to the nursery. The special interlude of holiday celebrating was unplanned but thoroughly enjoyed, the perfect memory of Christmas Eve play and storytelling thus becoming a tradition.
The addition of more children only enhanced the delight, so the once-a-year event continued. Following a lavish dinner and entertainment with carols in the parlor with whatever guests were dwelling at Pemberley, they dressed in sleeping attire and reclined upon their parents’ enormous bed in the fire-heated chamber while Darcy read a collection of Christmas themed stories. Songs were sung, prayers were recited, and upon occasion, everyone slept in the room rather than returning to their own chambers.
The story choices varied year to year, but always concluded with a Bible reading of Christ’s birth. This year Darcy chose the writings of Washington Irving from The Sketchbook of Geoffrey Crayon. After disappointing Michael and Noella by refusing to read the tale of Ichabod Crane and the Headless Horseman of Sleepy Hollow, he began with “Christmas Eve” and had not gotten far when the first of what would probably be several sparring interruptions had occurred to discuss the origins of clog.
Lizzy laughed from her comfortable location leaning against Darcy, propped on a large goose-down pillow and holding the youngest Darcy asleep on her chest. She met her husband’s eyes and smiled, and then she winked at her eldest son. It certainly was annoying at times, but the antics of Michael and Noella were amusing. Alexander smiled, bending his head to nuzzle a kiss to the head of the fourth Darcy offspring who sat curled on his lap.
“Papa, finish the story, please.” The four-year-old’s tiny voice, sweet and velvet, brought instant tranquility to the room. Everyone smiled, even Noella and Michael, tender eyes alighting upon the fragile child encased in her protective brother’s embrace.
“As you wish, angel.” Darcy resumed his reading, the tendrils of peace touching all of them as if a spell had been cast.
Such was the natural power of Audrey Faine Bethann Darcy. 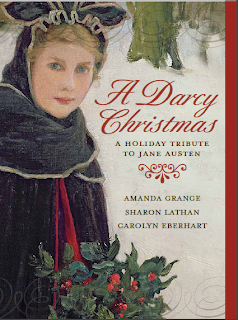 I absolutely LOVE Christmas! And I ADORE the Darcys! Thus it is a double pleasure to be on Darcyholic Diversions today talking about my two favorite subjects! My novella can be purchased as a separate eBook download from Amazon and B&N for a mere 99 cents, or read along with the excellent novellas by Amanda Grange and Carolyn Eberhart that comprise the anthology A Darcy Christmas, available as an eBook or paperback.

For joining me today and sharing your favorite Christmas tradition, I will be giving away the eBook version of my novella - A Darcy Christmas - to TWO lucky winners. Comment to enter before the deadline next Wednesday, December 12.