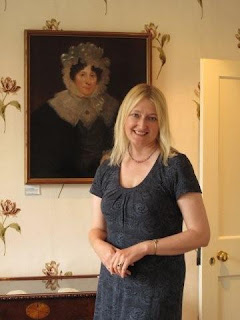 (I am very happy to have Victoria Connelly visiting with us here at Darcyholic Diversions today.  Hers is the first of a number of posts that will be featuring Holiday themed Jane Austen Inspired Books.  Enjoy getting to know Victoria and her Christmas with Mr. Darcy.) 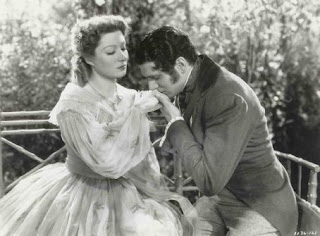 I first fell in love with Mr Darcy when I discovered the old black and white film starring Laurence Olivier and Greer Garson as Mr Darcy and Elizabeth Bennet. I was about thirteen and I remember the wonderful archery scene when Mr Darcy stands behind Elizabeth, his arms guiding hers. I thought that was so romantic! I loved the sizzling scenes between him and Elizabeth. Greer Garson was sparky and intelligent and Laurence Olivier was so reserved and dashing. But it wasn’t until a few years later that I read the book and my lifelong love of Jane Austen began in earnest. 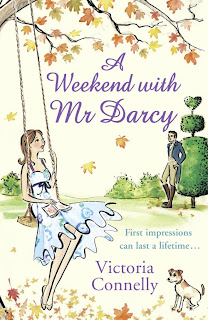 What I love about Mr Darcy is that he makes mistakes – great big stonking ones.  He gives appalling advice to Bingley having completely misread Jane Bennet’s character, he snubs Elizabeth at the ball and then insults her and her family.  He also manages to alienate just about the whole of Meryton but, from the first time we see him, he fascinates us and he is willing to change for the woman he loves and that is totally irresistible!

I amazes me how Austen’s work has stood the test of time and how readers are still so in love with her characters and stories, and I really wanted to explore that.  Why are these books still so important to us today?  Why are we still obsessed with Mr Darcy and Austen’s other wonderful heroes?  And can there ever be enough TV and film adaptations?  These were just some of the questions I hoped to answer in my Austen Addicts’ Trilogy.
I’d been visiting some of the locations connected with Jane Austen’s novels and I knew they’d make great locations for stories and so I got down to writing the first – A Weekend with Mr Darcy – where two couples meet and fall in love at a Jane Austen conference.
Whilst researching my trilogy, I had the joy of reading Jane Austen’s letters to her sister and some of the biographies about her life.  I visited the places associated with her - spending many a happy hour at the Jane Austen House Museum in Chawton, Hampshire, staying in the seaside town of Lyme Regis and walking the streets of the Georgian city of Bath.  I even got to stay in ‘Barton Cottage’ - the house that was used in the 1995 film version of Sense and Sensibility and I wrote part of Mr Darcy Forever whilst there, using the setting in my book.
Another highlight was taking part in the Jane Austen Festival in Bath.  Although I didn't wear a costume, I met dozens of people who had travelled from all over the world to be there because of their love of Jane Austen.  It was a real insight into the fan base that this author has. 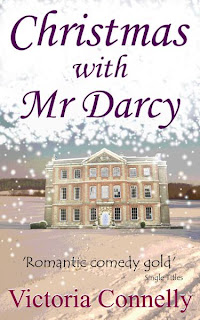 So, I’ve now written three full-length novels about Austen addicts and have just released a novella on Kindle – Christmas with Mr Darcy – where my main characters from the trilogy get snowed in at Purley Hall in Hampshire and have to turn detective when a first edition of Pride and Prejudice goes missing.
Jane Austen has been such a huge part of my life and I am eternally grateful to her for her magical stories and her fabulous heroes and heroines!
www.victoriaconnelly.com
Twitter: @VictoriaDarcy

'Christmas with Mr. Darcy' on Amazon
Posted by Barbara Tiller Cole at 11:08 PM