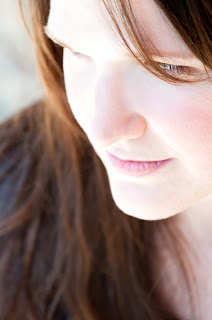 (I am happy to welcome Edie to DarcyholicDiversions!  She will be giving away an eBook of 'The Houseguest' to one lucky commenter.)

A letter to Jane Austen

You don’t mind if I call you Jane, do you? Good. Feel free to call me Elizabeth. Or Liz if you prefer. Now, we need to talk.
Are you aware of the craze you incited when you wrote a certain character by the name of Mr. Darcy? Do you know how many women spend their free time dreaming of him, imagining meeting him, and reading about him? No? Well, I should tell you that it’s gotten a little out of hand.
Mr. Darcy has become the one romantic hero almost all women can agree on. He is the ideal other men are compared to and the fantasy no one can live up to. What were you thinking? Sure, he’s smart and cultured. Everybody loves a smart guy. But then you had to go and make him loyal and strong and steadfast. As if that weren’t enough, he’s also incredibly handsome and he’s tall. Did you know I’ve always had a thing for tall guys?

Add to all of that his fancy house in town and a gorgeous, magical, un-mortgaged estate in the country. Were you trying to drive everyone crazy? To taunt us with the perfect guy that will never really exist?
Just to show he’s not too perfect, you make him rude and insulting when we first meet him, Really?
but still loyal and brave. While this may seem like a flaw, it is actually an ingenious plot designed to show us just how great he is. Because as soon as the woman he loves points out his faults, he gets mad (proving he’s hot blooded – which just makes him more attractive) and then he gets reasonable. He learns from the past and from her and becomes worthy of her. Did you hear that, Jane? A man, who has everything going for him and women falling all over him, changes his behavior to make himself worthy of a woman. A woman who, by the way, is considered undeserving of him by society at large and who has rejected him vehemently. He has no guarantee he’ll ever even see her again. Really?

Then, this great catch turned all-around great guy, delivers the grandest of grand gestures and we go from serious like to all out love. What were you trying to accomplish here? Was there a ‘create the perfect man’ contest? (You win, by the way.) Were you playing out your own fantasy? Or was it all just a big cosmic accident and you had no idea how he’d catch on – and still be going strong 200 years later?
Listen, Jane, I don’t want to be rude, I’d like to think we’re friends of a sort, but you really ought to lighten up a bit on the ‘perfect man’ thing. (“There’s something pleasant about his mouth when he speaks.” Seriously? We all know what that’s code for.) You couldn’t make him shorter, or a little chubby, maybe with a bald spot and a missing tooth? Or maybe he could be terrified of spiders and snore like Daffy Duck. Something! Give me something to make him just a little less perfect and a little more resistible. I’m begging you!
I hope you’ll take this under advisement.

I found JAFF completely by accident. It was late summer 2010, and I had a hair appointment where I knew I would be sitting in a chair with foil on my head for an hour. I needed something to read, I was at Target and I saw Sharon Lathan’s first book. I loved the original P&P (who doesn’t?) so I thought I’d give it a try.
I ended up not reading it that day, which turned out to be a good thing because when I finally did read it, I couldn’t stop blushing! I ordered two more online and the next thing I knew, I was scouring the local library for any Darcy-related books. I had never even heard of fan fiction before that, but once I found variations, I was hooked.

Would You Call It an Obsession?

I don’t know if I would go so far as to say “obsession”. He’s definitely my favorite romantic hero, and I do read more JAFF than anything else, but I do enjoy characters that aren’t Darcy. I’ve certainly never almost said the name ‘Darcy’ in an intimate moment and covered it up with the word ‘darling’.
So no, not an obsession. Just a healthy interest. That’s all. Definitely not obsessed. 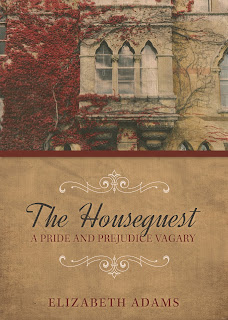 The Houseguest is a P&P variation with a completely different plotline. Georgiana comes to visit Darcy at Netherfield for a week and becomes friends with Elizabeth Bennet. They correspond after she goes back to London and Miss Darcy invites Elizabeth to come for a visit while Darcy is away. He comes back unexpectedly and ends up being trapped under the same roof with Elizabeth for three weeks.
I had a ridiculously good time writing it and torturing poor Darcy. It began in autumn of 2010. I had yet to find any JAFF sites, but I had read several published JAFF books, both traditionally and self-published, and while I really enjoyed most of them, I found myself wishing another option was explored or something happened this or that way. My husband kept saying I should write my own and I had always been a decent writer, so I decided to give it a shot.
The characters took on lives of their own and it was out of my control before I knew what was happening. I originally intended the second half to be quite different from what it is, but the characters just wouldn’t cooperate.

This is from Chapter 7. Elizabeth and Darcy are in the library and she is telling him a story from her childhood. This is the tail end of that story.

“…I told them we would race to the top. If I got to the doll first, they could not take any more of our toys and must behave like gentlemen the rest of their trip. If they got to the top first, we couldn’t tell their mother about any of this. We shook on the deal and they decided horrid Thomas would be the one to race me, since he was taller and had longer limbs.

“I tied my skirts up around my waist and Jane counted us down. When she said go, we both began to climb furiously, but I knew the way better.” She couldn’t hide the air of pride she felt in her accomplishment. “I had climbed that tree hundreds of times and knew exactly where to step. I had made it to the top and was reaching for the doll long before Thomas. He was so angry with me, he reached out to grab the doll from my arms, but I hit him with my elbow.”

She released a sigh.

“Unfortunately, he lost his balance and fell all the way to the ground. His arm was twisted terribly behind his back and he was screaming in pain, and cursing me with words I had never heard. Michael ran for Mr. Hill and the doctor came and declared he had a broken arm.

“They couldn’t set it until our parents returned several hours later, so he was given laudanum and laid in the kitchen crying and writhing in pain. Eventually all was set right, but he ended up having to stay with us another six weeks until the doctor declared he was ready to travel.”

She slumped back into the chair and exhaled loudly. “It was horrible! My mother went on and on about how unladylike my behavior was and said that if I wasn’t so wild, none of this would have happened. As my punishment, whether for climbing or pushing, I don’t know, she made me act as Thomas’s nurse while he stayed with us. I had to bring him tea and give him his medicine. Mother said it would teach me how to take care of a man, which was what I should be doing, instead of keeping my nose in books all day.” She rolled her eyes.

“Learn to take care of a man?” he asked with a smirk and a glint in his eye.

“I hardly think a twelve-year-old boy can be called a man, Mr. Darcy,” she replied with an impish smile.

He let out a deep, rumbling laugh. “No, he cannot, Miss Bennet. He certainly cannot.”

You can see outtakes for The Houseguest and more at www.elizabethadamswrites.wordpress.com.

Available on Amazon Through This Link