Jennifer Petkus: Write What You Know! 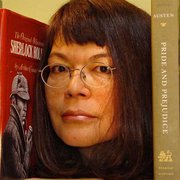 Don't forget to read any posts from June you might have missed as it has been busy!  There are many give aways, and I will be drawing this weekend for June, and there are now July give aways as well! Included in that list of give aways are posts from Kara Louise, Becky Thumann, Sharon Lathan and Shannon Winslow as well as Laura Ann Nattress; as well as the posts from Gayle Mills, Jan Ashe, Stephanie Hamm and Krista Bagley.  Read ALL of them and don't forget to comment!  Comments are your entries to WIN those giveaways!

Comments on Jennifer's post will enter you drawing for her book-- a standard paperback for US and Canada and ebook internationally; and into the monthly drawings here at Darcyholic Diversions.  Entries will be based on comments on blog posts; but additional chances will be given for joining this site, tweeting this post, Joining this site as a member via Google Friend Connect (GFC) (See the left hand column on the blog to join!), sharing this on Facebook or your blog, Friend me on Facebook, clicking 'like’ on Barbara Tiller Cole, Author's Facebook page, Join Darcyholic Diversions Facebook Page or following BarbTCole on Twitter.


Write What You Know!

Write what you know. It’s a dictum that I think Jane Austen understood and took to heart, even though I don’t think she bought books about writing (my husband must have a dozen) or went to a writers’ conference (guilty). After all, Austen was born as America fought for independence, lost a family member to the guillotine and wrote during the Napoleonic War, but little of those world-changing events appear in her books.
I hasten to add the background noise of those events is certainly there if you look carefully—from those red-coated soldiers of whom Lydia Bennet was too fond, to John Dashwood’s plans to enclose the commons (1), and to the riot that wasn’t in “Northanger Abbey”—but it’s certainly not overt.

If Austen were alive today, however, would she be tempted to write outside her ken? If she could Google “Code Duello,” (2) might a future book have an actual duel, rather than the implied one in “Sense and Sensibility” between Brandon and Willoughby? If present-day Austen could download Patrick O’Brian to her Kindle, would she write thrilling naval battles rather than just have them in the background as they are in “Persuasion” and “Mansfield Park.” (Imagine Captain Wentworth telling Anne Elliot blood-soaked stories of the French prizes he has taken.)

Of course, if you look at how carefully Austen wrote, you would almost think she had access to a Regency Wikipedia. The duration of a coach trip, the distances between her fictional villages and the careful description of topography and nature in the varied locales of her novels reveal a writer who got the little details right. An over-reliance on Wikipedia, however, might be an explanation for those apple blossoms in June, but that debate continues (3).
Or would Austen be tempted to tackle a little “guilt and misery” if she were writing today? Her novels have inspired many writers to adapt Austen to the mystery genre and Austen herself has been recast as a detective. Just think what Austen could do with a little old lady detective and three or four families in a country village, but sadly the mystery genre didn’t exist until arguably Poe’s C. Auguste Dupin in 1841 and inarguably Doyle’s Sherlock Holmes in 1887.

Emma, of course, is something of a detective, just not a very good one. “Emma,” in contrast, is a very good mystery with the surprise revelation that … well, I’ll let you find that out for yourself. I will point out that any good romance is a good mystery—the essential mystery of how two people meant to be in love can manage to screw it up for an entire book.

I succumbed to the temptation to combine Austen and mystery (and Sherlock Holmes) in my novel, “My Particular Friend,” and I chose to write explicitly about dueling and navigation canals and the streets of Bath aided by Google Maps, a book on dueling downloaded from Amazon and a website on parliamentary history. I completely violated the write what you know rule, and I think an Austen surviving to the present day would be tempted to ignore the rule as well.

Or maybe Austen would be tempted to write in a different style altogether. Imagine a Jane Austen who’d read “On the Road,” “The Grapes of Wrath,” “The Sun Also Rises” or “The World According to Garp.” Were she finally to complete “Sanditon,” would it be written on one long scroll (4) with no margins or paragraphs? Would she write in Hemingway’s newspaper prose style?
Then again, one thing that has always struck me about Austen’s novels is how different each one is, despite the popular belief she always wrote romance stories that were really a comedy of manners with no plot about poor women who had servants but couldn’t get married. To me and to many others, “Mansfield Park” is a world away from “Pride and Prejudice,” and that willingness to try something different would surely make for a very interesting Austen still writing in the present day.
Or would Austen choose a different medium altogether were she alive today? She obviously enjoyed plays, so might she be a playwright? Or an even more seductive possibility: would she write for television or the movies?
Most would agree her novels make great drama for TV or the movies. And I think most of us, consciously or not, rank her novels first by story and then as written words. For instance, I adore the story and the characters of “Emma,” but lying in bed at night I fall asleep once I hit a page-long Miss Bates paragraph. Would Austen, were “Emma” a script, have indicated that Miss Bates’ dialog fades into the background as Emma and Jane Fairfax converse, just as is done in many adaptations?
Or were Austen alive today, would she be involved in new media? She’s an obvious blogger, although she would certainly need Cassandra’s guidance to make sure she didn’t post anything too sarcastic. Just imagine the flame wars she could ignite. Would she be political? And of what persuasion? I shudder to contemplate it. Would she tweet? Would she create YouTube videos like the Lizzie Bennet diaries (5)?
The mind whirls at the thought of a present-day Austen with the convenience of word processing and the resources of the Internet. I can’t imagine her still using her little scraps of ivory, although I don’t think she’s quite ready to trust her words to the cloud.
I also don’t see her still writing anonymously, not in an age when anyone can publish a book in minutes. In fact a present-day Austen still might not find a publisher and she might be forced to self publish (6). After all, “Sense and Sensibility” was essentially self-published.
But as much as I like to speculate about what a present-day Austen would be like, I like to imagine Jane still living in Hampshire, still in a cottage, and still with a creaking door … that allows her to discreetly put her iPad to sleep whenever a neighbor comes to call.

Note: The novel I’m currently writing, “Jane, Actually or Jane Austen’s Book Tour,” imagines a Jane Austen who has “survived” to the present day and is promoting her just completed “Sanditon.” A movie deal is in the works.
(1) John Dashwood enclosing the commons: “Wealth has much to do with it”: The Economics of Sense and Sensibility, by Dr. Sheryl Craig, Persuasions (JASNA publication) No. 33
(2) Code Duello: http://www.pbs.org/wgbh/amex/duel/sfeature/rulesofdueling.html
(3) Apple blossoms in June: http://austenprose.com/2008/05/24/apple-blossoms-in-june-austens-literary-mystery/
(4) On the Road: http://en.wikipedia.org/wiki/File:Kerouac_ontheroad_scroll.jpg
(5) The Lizzie Bennet Diaries: http://www.lizziebennet.com/
(6) Jane Austen fan submits work anonymously: http://www.dailymail.co.uk/news/article-469342/Jane-Austen-fan-submits-work-anonymously-publishers--receives-dozen-rejections.html
Amazon' Link to Jennifer Petkus's Book

Posted by Barbara Tiller Cole at 12:12 AM