This year is the 200th Anniversary of Charles Dickens birthday--February 7, 2012 as well as the 200th anniversary of Jane Austen’s completion of Pride and Prejudice (actual publication date was 1/28/1813).

I will be celebrating different aspects of the joint 200th Anniversaries over the next year, but as this coming Tuesday is Charles Dickens’ 200th Birthday Celebration, I will be giving away 2 copies of my most recent book at the end of this week in celebration of this Bicentennial event.

When I first conceived of the cross-over idea for Fitzwilliam Ebenezer Darcy it had nothing to do with this year’s joint anniversary.  I had recently lost my parents, the year I completed the rough draft, and wrote it in their honor.  Dickens was my father’s favorite author, and Austen my mother’s.  Each Christmas my father would gather us around the fire and read to us A Christmas Carol, while my mother constantly encouraged me to improve my mind through extensive reading, aka Jane Austen/Elizabeth Bennet style.

I started this blog to celebrate my true love for Mr. Darcy.  But my discoveries of Austen were initially inspired my parents love for literature.

At a later date, I will tell you more of MY Darcyholism, but for this week I wish to celebrate the life of Dickens.

Of course, the first novel I discovered was A Christmas Carol.  Originally with my dad’s reading, and then with various film and TV versions as well as my own reading.  Next up was Oliver Twist!  I decided to read it after seeing the big screen musical version with Ron Moody and Mark Lester.  Reading Dickens was a challenge for a youngster as young as I at the time, but determinedly, I completed it and learned a great deal in the experience.  Next up was A Tale of Two Cities which I utilized for a term paper in my English class.  Later, I would go on to read Bleak Street, Great Expectations, Little Dorritt (which later many Austen fans delighted in visualizing Matthew MacFayden’s portrayal) and The Mystery of Edwin Drood.   I found this wonderful Tribute to Dickens and the film/TV versions of his works.  If you watch closely you will see Matthew MacFayden within the tribute:

Historians celebrate Dickens and his works each and every year, but particularly this year of the 200th Anniversary.
For me, the melding of Dickens and Austen seemed obvious, but it was inspired by my Christmas 2008 Marathon viewing of 10 variations of A Christmas Carol in only one weekend.

I come to the conclusion of my brief introduction to the joint 200th Anniversary celebrations.  Celebrate with me here.  I will chose winners this week from ALL the comments on the blog site, as well as to this particular thread.  Extra entries will be given to those who are members of this blog, or who Like, Barbara Tiller Cole, Author or who Follow BarbTCole on Twitter.

'Pride and Prejudice' meets 'A Christmas Carol' A Jane Austen/Charles Dickens crossover story, 'Fitzwilliam Ebenezer Darcy' takes the best of both classics and spins them into a delightful Holiday treat! F.E. Darcy has fallen into pitiful self-loathing and sorrowful angst-ridden despair; all of this due to his belief that he has lost forever the chance to marry the only woman he has ever loved—Elizabeth Bennet. Seeing her son in such a state, the Ghost of Anne Darcy reaches out to him; informing him that three ghosts would visit him and give him hope. Will these Spirits provide him with the courage to try again to win the esteem of his one true soul mate? Barbara Tiller Cole, an Atlanta native and the writer of the popular book 'White Lies and Other Half Truths', presents this family friendly classic—a delightful combination of the best of her two favorite authors, Jane Austen and Charles Dickens. Barbara credits her parents with fostering a love for both of these authors. Each Christmas, Barbara’s father would sit and read Dicken’s classic 'A Christmas Carol' to the family. Her mother consistently challenged her to improve her mind by extensive reading, Jane Austen style. This book is dedicated to the memory of Cliff and Jeanne and the season they loved the best. 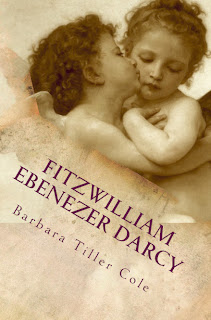