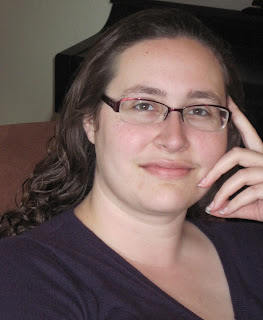 
Comments on Nancy’s post will enter you into a contest for an eBook copy of His Good Opinion (as well as be included in the drawing for 2 autographed copies of my book, Fitzwilliam Ebenezer Darcy--to be given away at the end of the month from all the comments on the blog this month). Entries will be based on comments on blog posts; but additional chances will be given for joining this site, tweeting this post, Joining this site as a member!, sharing this on Facebook or your blog, Friend me on Facebook, clicking 'like’ on Barbara Tiller Cole, Author's Facebook page, or following BarbTCole on Twitter; becoming a member at Nancy’s blog, Austen Aspirations, following Nancy on Twitter at Nancy_Kelley, or joining the site she co-created Indie Jane. Please note any of these things that you do in your blog post for extra entries. 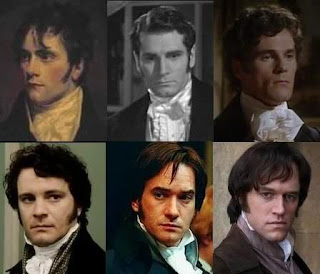 Try this for a deep, dark secret. The great romantic hero, Fitzwilliam Darcy? I didn’t like him at first. Follow: I always loved reading, so my school librarian handed me classic after classic. I read Les Miserables, The Three Musketeers, and Wuthering Heights all before finishing my freshman year of high school.

Then she realized that I am a romantic at heart, and she handed me Pride and Prejudice. I have to confess, as a 15 year old, I didn’t really see the appeal of the hero. Darcy’s first proposal was disastrous, and his second… Well, Jane uses so much indirect dialogue that I couldn’t see the romance.

However, I did love Elizabeth. She was strong and clever, and she refused to be forced into the mold Society said a young lady should fit. I may not have loved Mr. Darcy, but I definitely wanted to be Elizabeth Bennet.

Elizabeth caught enough of my imagination that I would re-read Pride and Prejudice several times over the years, and eventually, Mr. Darcy grew on me. Once I had read the book a few times, I could fill in the blanks in his second proposal, and it was finally romantic.

I still wasn’t a Darcyholic, however.

Then one day I was listening to Pride and Prejudice. At the beginning of Chapter 33 (Section 2, Chapter 10) when Elizabeth bemoans the way in which Mr. Darcy always appears along her favorite walk, I heard Darcy's voice in my ear. "I had not realized that was to be a warning, rather than an invitation," he said, his voice colored with mortification.

Suddenly I could see the entire story from his point of view. There are so many times when she thinks she is discouraging him and he completely misreads the situation. It was not simple arrogance that led him to believe she welcomed his affections—she says later that her spirits may have misled him, and indeed they did. 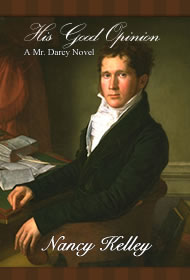 Once I could sympathize with Darcy, I could love him. And once I saw the story from his perspective, I had to tell it. That was the beginning of my work on His Good Opinion. From there, I spent months working through Pride and Prejudice, looking for every nuance of Darcy’s reactions to Elizabeth’s words.

That version of Darcy I first heard whisper in my ear took residence in my head. I came to think of him as the DIMH, or Darcy In My Head. He guided me in the writing process, often giving me a subtle nudge when I wasn’t sure how to write a scene.

It’s been at least 17 years since my first introduction to Mr. Darcy. Though I did not always love him so well as I do now, in cases such as these, a good memory is unpardonable.

Nancy Kelley is a Janeite, an Austenesque author, and a blogger. She will be self-publishing His Good Opinion: A Mr. Darcy Novel later this year. During the writing of that novel, a version of Mr. Darcy took up residence in her brain; she fondly refers to him as the Darcy in My Head, or DIMH.

If Nancy could possess any fictional device, it would be a Time-Turner. Then perhaps she could juggle a full-time library job, writing, and blogging; and still find time for sleep and a life. Until then, she lives on high doses of tea, of which DIMH approves.


Nancy also loves Remington Steele, as some may have gathered from the opening lines of her post. Sadly, she does not own a fedora.

His Good Opinion can be purchased in e-book format from Amazon, Barnes and Noble, Smashwords, Amazon UK, Amazon DE, Amazon FR, Amazon.IT, and Amazon.ES. The paperback is available from Amazon.