An Interview with Amy D'Orazio, Author of The Best Part of Love 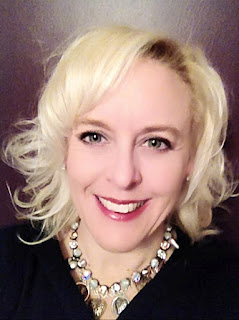 An Interview with Amy D'Orazio, Author of The Best Part of Love
By Barbara Tiller Cole 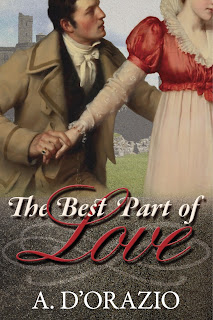 It is exciting to be a part of Amy D'Orazio's book tour and to get a chance to interview her.  I hope you enjoy getting to know her as much as I have.

As an author myself, I made a decision when I began this blog not to formally review other author's work.  I love to read Austen inspired works myself, but I want to honor and celebrate it, not criticize. What is exciting is getting to know authors and giving readers a chance to know their backgrounds and inspiration for writing.

However, when I read a book I like I am VERY happy to share.  I have always enjoyed Pride and Prejudice variations in which Elizabeth is something different from her 'canon' self.  Amy shares an Elizabeth that I really liked from the beginning her new novel!  She is very smart and very brave.  I know that you will enjoy, as much as I did, reading Amy's newest release, The Best Part of Love.

When I was first contacted about hosting Amy, I knew her name sounded familiar.  But it was Amy herself who had to remind me.  She was featured here at Darcyholic Diversions when she was just a Darcyholic reader.  As a part of this blog tour, I will be selecting at least one reader to share your story.  So comment below for a chance to post here!  Maybe you will be as inspired as Amy was and I will be hosting you later as an author as well.  Instead of making you search, you can read Amy's prior post at this link.

And now for the interview:

AD:  I believe I must have first read Austen in high school or college — it didn’t have the impact it had on me in my later years. I think Sense & Sensibility was the first that I read and truth be told, that has never been one of my favorite stories.

I am a scientist, and most of my education was therefore driven in that direction. I expended as little effort as possible in the direction of literature, so I’ve always had the nagging feeling that I’ve missed out on a lot of great reads. Somewhere in my mid-thirties, I decided I would embark on a read of some of the classics, and I’ve been doing that ever since. Happily, I started with Jane Austen, and she will always be, to me, the greatest of all writers.

AD:  When you read a Jane Austen book, you get a little bit of everything: laughter, tears, sarcasm, wit. It’s all in there, seamlessly blended.

However, that said, to me what makes Jane’s work so unforgettable is her characters. It has always amazed me how she gives such a bare sketch of many of her characters, and yet they come alive on the page. Whether you love them or hate them or don’t know what to think of them, Jane’s characters stick with you and you find yourself wanting to understand them more.

Pride and Prejudice is absolutely my favorite, hands down! As for my favorite character, I am probably not saying anything too shocking when I say it's Elizabeth Bennet. It amazes me that Jane Austen could conceive of a lady who, over two centuries later, is still so likable and relevant to a modern audience.

BTCole:  When did you first discover Jane Austen-inspired literature?

AD:  It was a very happy day, I can tell you that haha! On a previous visit to your blog, I know I mentioned a story of how we were searching for something on TV one day and stumbled across a showing of the 1995 P&P miniseries and shortly after that, I learned of the Pamela Aidan trilogy — that was really my first dip into JAFF. From there I was led to the published JAFF books which at the time was not a whole lot, not like there is today.

It wasn’t until I read the acknowledgements in one of Linda Wells’ books that I discovered the world of online forums and unpublished JAFF. That was a pretty thrilling discovery, and to date, it is the online forums that hold most of my favorite stories, although of course there are many wonderful stories which have gone to publication too.

BTCole:  Would you call yourself a ‘Darcyholic’?  Why or why not?

AD:  I guess it would depend on the definition of darcyholicism! I know there have certainly been times when it seemed like the world of P&P filled my mind to the exclusion of all else, particularly in the first weeks/months of my JAFF journey! I’ve been around the world of Austenesque literature for about five years now, and now it's a little different. Some days my mind is filled with new story ideas, and I’m reading a great new story that I can’t seem to put down, but there are other times when it’s less so. I think it's a good thing that it evolved that way because real life wasn’t tolerating the first phase!

BTCole:  What about it made you want to write an Austen inspired book yourself?

AD:  When I started writing, I firmly vowed it was just for me, I was confident I’d never post it anywhere and certainly never dreamed of publishing. I used writing as a way to pass the time as I’d sit at my kid's sports practices and so forth but eventually I realized that posting allows you to grow a lot as a writer. I am always indebted to those who participate in those as writers and betas and readers and commenters because they helped me learn and hone and improve.

For as great as reading a story is, writing is (to me) even better — you get immersed in the world of D&E!

BTCole:  Your Elizabeth is very different from canon.  What was your inspiration for her character?

AD:  My Elizabeth starts off the story having gone through some pretty traumatic circumstances. She was young, just a teenager, when she was left a widowed mother with a world of responsibility on her shoulders. In thinking about her character then, I just tried to imagine how canon Elizabeth might have responded to those circumstances, and how that would have shaped her. She is still intelligent, still charismatic but, certainly at the beginning of the story, she is a quieter, more sober, and less opinionated version of herself.

Of course, one of the things that draws her to Darcy is that something in him resurrects her wish to tease and converse freely and give opinions on things. She can’t understand it at first but eventually she feels a sense of gratitude towards him for uncovering the part of her that had been trampled down by life.

BTCole:  Anything else you would like us to know?

AD:  One thing I am often asked about is an original recurring character who is in many of my stories, Viscount Saye. Many want to know where he came from and who, if anyone, is the inspiration for him.

Viscount Saye is Colonel Fitzwilliam’s older brother, heir to the earldom (which I always call Matlock although we know Jane herself never specified it). He is something of comic relief; he is an unrepentant bad boy who, deep down, has a good heart although it grieves him to show it. He likes to say what everyone else is thinking (but too polite to say), and he tweaks Darcy when Darcy most needs tweaked.

There is no true real-life inspiration for Viscount Saye. He is a sort of amalgamation of different people, mostly men, who I have known, and he was largely created as someone who is similar to Darcy (first son and heir) but who does not take life very seriously. Darcy needs that sometimes!

AD:  I always have two or three new projects working! One thing I have always wanted to do is write something in the style of books that were popular in Austen’s day, the gothic romances like those written by Anne Radcliffe. Of course its hard to imagine a situation in which Pemberley is transformed into a gloomy castle!

BTCole:  Do you have any personal pictures that assist in telling us your 'Darcyholic' story?

AD:  I don’t really have pictures of that sort of thing although I have many pictures which inspire and help my writing on Pinterest. There is a specific board for The Best Part of Love as well as many other boards I use for research and just general interest!

Avoiding the truth does not change the truth

When Fitzwilliam Darcy meets Miss Elizabeth Bennet he has no idea that she — that indeed, the entire town of Meryton — harbors a secret. Miss Elizabeth, a simply country girl from a humble estate, manages to capture first his fascination and then his heart without him ever knowing the truth of her past.

When she meets Darcy, Elizabeth had spent the two years prior hiding from the men who killed her beloved first husband. Feeling herself destroyed by love, Elizabeth has no intention of loving again, certainly not with the haughty man who could do nothing but offend her in Hertfordshire.

In London, Elizabeth surprises herself by finding in Darcy a friend; even greater is her surprise to find herself gradually coming to love him and even accepting an offer of marriage from him. Newly married, they are just beginning to settle into their happily ever after when a condemned man on his way to the gallows divulges a shattering truth, a secret that contradicts everything Elizabeth thought she knew about the tragic circumstances of her first marriage. Against the advice of everyone who loves her, including Darcy, Elizabeth begins to ask questions. But will what they learn destroy them both?

Amy D’Orazio is a former breast cancer researcher and current stay at home mom who is addicted to Austen and Starbucks in about equal measures. While she adores Mr. Darcy, she is married to Mr. Bingley and their Pemberley is in Pittsburgh PA.

She has two daughters who are devoted to sports which require long practices and began writing her own stories as a way to pass the time she spent sitting in the lobbies of various gyms and studios. She is a firm believer that all stories should have long looks, stolen kisses and happily ever afters. Like her favorite heroine, she dearly loves a laugh and considers herself an excellent walker.

To Purchase The Best Part of Love Click Here

The eBook will be available on Amazon, January 6th. I will try to get the link to you for the eBook as soon as I get it. The Paperback should follow in two to three weeks.