Victoria Kincaid and Redemption found for Elizabeth in Darcy’s Honor: An Interview


Victoria Kincaid and Redemption found for Elizabeth in Darcy’s Honor:  An Interview

I am happy to welcome Victoria Kincaid to Darcyholic Diversions today.  I enjoyed getting to know her during this interview and through her recently published novel, Darcy’s Honor.  Victoria is giving away to an international winner either a paperback or ecopy of her book, winner’s choice.  So be sure to leave a comment below.  Extra entries will be given for sharing this post link on Facebook, twitter, liking this blog, my author page, and friend requests on Facebook for either me of Victoria.  Will be drawing the winner next Thursday. 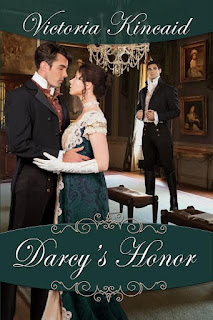 Victoria, tell us a little bit about how and when you first discovered any of Jane Austen's novels.
I read Pride and Prejudice in college, but I don’t think the novels really spoke to me until I was a little older—when I could appreciate the subtlety of what Austen was doing.

Was it one of Jane Austen's books, or one of the Austen movie adaptations that really began your love affair with Austen?
I do think the 1995 adaptation of P&P helped to inspire my love of Austen and made me turn back to the books.  It helped me remember how brilliant Austen is.

What is your favorite of Jane Austen's novels?
P&P is my favorite and I think it’s the most accessible in terms of writing JAFF.  I love Persuasion and Sense & Sensibility as well – and have a soft spot for Mansfield Park.  I have trouble really loving Emma, although I understand intellectually why people think it’s a brilliant book.

How did you first discover JAFF/Austen-inspired literature?
I wanted more Austen!  I started with the P&P variations that were available at my library.  When I had read all of those, I went to Amazon.  It eventually got to be expensive to buy so many print-on-demand books, so JAFF was responsible for the purchase of my first Kindle. 😊

How has your career or your hobbies influenced your writing?
It’s funny.  I have a Ph.D. in English literature, but my specialty was 20th century drama, so I didn’t actually study much about Austen’s time period in graduate school.  Of course, it did give me some tools to analyze literature and become a good writer (and editor).  I’ve also been a playwright since my undergraduate years—and I teach playwriting in Washington DC.  That gave me a lot of experience in writing, but it was also a little strange switching gears to writing novels.  When you’re writing plays, all the information must come out in the dialogue, so I had to get used to writing narrative and description.  Writing novels has been a lot more rewarding than writing plays; however,  and I’m very glad I made the switch.

What inspired you to write your first novel?
My story is probably similar that of a lot of JAFF writers:  I was reading all this JAFF, and I was inspired with an idea to write my own.  I wasn’t necessarily planning to write a second one, but my first novel was well received, and I had ideas for more P&P variations running around in my head.

What was the inspiration for your new release, Darcy's Honor?
It’s hard to remember now because the idea has been simmering on the back burner for so long.  I think it was partially inspired by P&P itself and Lydia’s story—the idea of what happens if a woman does lose her reputation.  I wanted to write a plot in which a woman’s reputation was regained.

What helped you determine the characteristics of your non-canon character added to your story, Lord Henry?  What did you like and not like about him?
I needed a villain who was out to compromise Elizabeth’s reputation.  He had to be high-born and powerful—so Lord Henry was the result.  I would have liked him to be a more sympathetic character—more human—but I have trouble seeing the “good” side of someone like him. So he ended up being pretty villainous, but I don’t think that hurt the story.

Without giving away anything from your story, there is an interesting twist in the story involving Lady Catherine.  Care to tell your readers anything about the inspiration for this?
Some of it was driven by plot.  I needed someone to deliver a particular piece of information about Lord Henry.  But I also liked the idea of Lady Catherine doing something unexpected.  At the same time, her attituded toward Elizabeth isn’t radically different from her usual contempt.

Are you currently writing thing new you would like to discuss?
I am writing the first draft of my next P&P variation, which will be my first modern variation.  It’s both exciting and nerve-wracking. 😊

Anything else you would like to share with the readers here at Darcyholic Diversions?
Thank you for having me as a guest!

As they rounded a bend in the road near Longbourn, Elizabeth disengaged her hand from Mr. Darcy’s arm, rather more reluctantly than she would have expected. It felt unaccountably natural there. She turned to Mr. Darcy with words about a headache on her lips; however, before she could open her mouth, a shriek emanated from the direction of Longbourn.
“Lizzy! Lizzy!” Elizabeth turned to see her mother, hands bunched in her skirts, rushing toward them. A coach and driver waited outside Longbourn’s entrance. Presumably her mother had been about to embark on an outing when she spied them. What horrid luck!
Her mother stumbled to a stop in front of her, puffing and out of breath. “Lizzy! What on earth is the matter with you?” She gestured wildly at her daughter, apparently oblivious to Mr. Darcy’s presence. “Your hair! Your clothes! You look as if you have been tramping through the woods. What have you been getting into now? What if someone should see you?”
Elizabeth felt her face heat, no doubt turning all shades of red. She did not even know whether she was more embarrassed by the rebuke or her mother’s lack of decorum.
“Indeed, madam,” Mr. Darcy intoned. “It is almost as if she had been rushing about the countryside shrieking loudly.”
Mrs. Bennet turned to Mr. Darcy and blinked at him, not comprehending his sarcasm.
The situation likely was unsalvageable, but Elizabeth fell back on her manners anyway. She gestured to Mr. Darcy. “Mama, you may remember Mr. Darcy?”
Her mother’s mouth formed a perfectly round “o” of surprise. “Mr. Darcy! Oh! Oh!” She fluttered her hands and then executed an excessively deep and clumsy curtsey which threatened to pitch her into the dirt. “What has Lizzy been about this time, sir? Has she been causing you trouble? She is such a sly, headstrong creature!”
Elizabeth had not believed it was possible for her face to get hotter. I must be as red as a tomato now!
Mr. Darcy returned the curtsey with a stiff bow; his blank face betrayed neither disgust nor amusement at her mother’s behavior. “Indeed, madam, Miss Elizabeth has done nothing wrong.” Elizabeth felt a rush of gratitude that he did not mention the horse theft.
Mrs. Bennet took another look at Elizabeth’s disheveled state and sniffed loudly in disbelief. “Such a troublesome girl!” she exclaimed. “She is quite a trial to me!” Then her face lit up as it occurred to her that Mr. Darcy’s presence was an opportunity. “Why don’t you come into the house for a cup of tea, and you can converse with some of my other daughters?”
Elizabeth suppressed a desire to roll her eyes. Her mother was not nearly as subtle as she believed.
Mr. Darcy stiffened. “Not today, I thank you. But I will take the opportunity to call another day.”
As he mounted his horse, Mrs. Bennet took the opportunity to voice effusive offers of welcome and exclamations over the virtues of Cook’s poppy-seed cakes. Before he turned his horse toward Netherfield, Mr. Darcy’s gaze caught and held Elizabeth’s as if he intended to communicate some important message to her. But it was lost on Elizabeth. Seconds later, he had bidden them farewell and rode away.

Elizabeth Bennet is relieved when the difficult Mr. Darcy leaves the area after the Netherfield Ball. But she soon runs afoul of Lord Henry, a Viscount who thinks to force her into marrying him by slandering her name and ruining her reputation.  An outcast in Meryton, and even within her own family, Elizabeth has nobody to turn to and nowhere to go.
Darcy successfully resisted Elizabeth’s charms during his visit to Hertfordshire, but when he learns of her imminent ruin, he decides he must propose to save her from disaster.  However, Elizabeth is reluctant to tarnish Darcy’s name by association…and the viscount still wants her…
Can Darcy save his honor while also marrying the woman he loves?