Welcome Evie Cotton--Attendee and Now Friend to Many Austen Inspired Authors Due to her Attendance of the Decatur Book Festival!
I am very happy to welcome Evie Cotton to Darcyholic Diversions today.  Her personal observations and her story that led up to her attending the Decatur Book Festival was very enjoyable to me.  I hope you enjoy getting to know her as well!
I am also announcing initial plans for a Darcyholic Holiday eBook Festival.
More Information to come, but send me an email at barbaratillercole@gmail.com if you are an author and would like to participate!!

Comments count as entries into the monthly drawings here at Darcyholic Diversions.  You have till Tuesday morning for ONE last chance at the August drawings.  Chances will be given for joining this site, tweeting this post, joining this site as a member via Google Friend Connect (GFC) (See the left hand column on the blog to join!), sharing this on Facebook or your blog, Friend Barbara Tiller Cole on Facebook,  clicking 'like’ on Barbara Tiller Cole, Author's Facebook Page.


An Open Letter From an Austen Inspired Fan to the
Authors She Has Met!
I cannot begin to tell you what an honor it was to meet many of the Authors who have help to form my existence.
For many years I have followed the JAFF phenomena from a distance. I felt like the only one who had this crazy obsession with Mr. Darcy and Elizabeth. My gut told me that I needed to be apart of this community, but my stifling shyness prohibited me from ever stepping forward. I wrote reviews that I never submitted. I wrote letters to several authors that I never sent. The one thing that kept me coming back and watching from the sidelines was this feeling of connection that I had to the authors and fans. Making friends was never very easy for me. Sure I know a lot of people but can't say that I have any true friends outside of my family. I wanted desperately to be a part of this community but had no idea how to prove myself worthy of friendship. 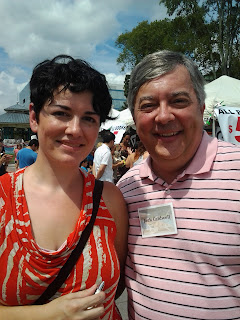 Jack writes in a style that is well thought out and complex however it is easily understood and allows the reader to feel comfortable at their own level. His unique take on Pride and Prejudice keeps you drawn in and the suspense and action of his stories forces you to turn the pages. It is writing that is very relatable to the reader. I'd like to say that if I were writing JAFF I would have thought of Civil War era Pride and Prejudice but I would not have been able to do the story justice in the way that Jack does.  Pemberley Ranch may be my all time favorite example of a good Pride and Prejudice variation. He takes the characters that I hold so dear and places them in another country and time with different struggles but keeps the nature of the characters in tact. By setting Pemberley Ranch in Texas at a tumultuous point in history, Jack takes the events of that time and paints a portrait of humanity and life that draws profound recognition of our American equality.

It was after reading Pemberley Ranch that I decided that I could not hang in the background any longer.

I began by becoming Jack's fan on Facebook. I left a comment here and there indicating how much I liked his book. I shared a link or two to various book reviews and slowly creeped out of the shadows. When Amazon sent me a notification that Jacks second book, The Three Colonels, was to be released in one week, I was ecstatic  Unfortunately I read the message wrong. It was being released in one MONTH not one week. It was the longest month ever. I could have pre ordered it at a discount, but I wanted Jack to receive the most money possible, so I waited. On the day of arrival, I went to three different book stores and was let down. Everyone else had pre ordered it so there were none in the city for me to purchase. It took fourteen days for me to get my hands on a copy and another two to finish reading it. Sixteen days behind! I couldn't post. I was mortified that I was so far behind after posting about how excited I was at the release. When I finally got the courage to leave a message on the fan page wall, I was surprised to immediately receive a friend request from Jack's personal page. After jumping around in a circle, screaming like an idiot and calling my dad (because my husband just wouldn't understand) I accepted his friend request and went straight to his friends list. Regina Jeffers, Abigail Reynolds, Barbara Tiller Cole, Sharon Lathon, etc. I hit the mother load! The JAFF brainhead! Friend request sent, friend request sent, friend request sent. Friend request accepted, friend request accepted, friend request accepted.

Regina Jeffers encouraged me to post a comment in Darcyholic Diversions for the first time. I couldn't believe how open and accepting everyone was. The Darcyholics are a wonderful community of like minded people. Never in my life have I had so much in common with anyone, much less so many. It was through this relationship with Regina Jeffers, a woman who has taught me so much, that I was introduced to Mr. Darcy's Extensive Readers. It was through Darcyholic Diversions and Mr. Darcy's extensive Readers that I was invited to join other fans at The Decatur Book Festival (or as i like to call it "The Darcy Book Festival").
I had a lot of apprehension about attending the DBF. Here was the chance to meet so many
of the people that I admire, but I would not be in front of my computer. I couldn't google responses to questions or contemplate witty replies in conversation. I was terrified of letting my true self out, afraid that the authors would see me for what I really am, a glorified stalker. I knew that at some point I would shove my foot so far down my throat that I would completely choke (and I did, Colette Saucier can attest to this). This was the chance of a lifetime, though, How could I walk away from rubbing shoulders with people that I highly respect and revere? I also have some work of my own. This would be a great opportunity to network with other writers and publishers, receive advice and glean from experiences of those in the writing community. In the end, I decided to go and risk humiliation.
Humiliation never happened, I am happy to say. Prior to leaving for Georgia, I was able to speak with Jack over the phone, a conversation which allayed much of my anxiety. Barbara Tiller Cole also did her part to ease my mind. Liaison extraordinaire, Barbara bent over backwards to accommodate me. While I wasn't able to stay at the Emory because of conflicts on my end,she was good enough to research the place I did stay and prepare me. I was able to get to know Jack and his wife Barbara on a more personal level prior to the dinner that was put on my the Jane Austen Society of North America-Georgia Branch. I sat with Barbara Caldwell  and listened with great enthusiasm to the three expert panel discussion that was moderated by Barbara Tiller Cole. At dinner, I decided to sit with people that I had not had any previous interaction with. Abigail Reynolds and her daughter Rebecca Young sat across from me. They were very warm and friendly. Abigail answered some questions that I had rolling around in my head and Rebecca became a fast favorite of mine. She is such an interesting girl! I can't wait to see everything that she has in store for the future. Her work with Regina Jeffers is outstanding.

Also at my table were Jakki Leatherberry, Meredith Esparza (women who I knew from blog reading and facebook,but who knew nothing of me) and Erlynn Berg Kirsch along with her most understanding husband. We almost spent the evening without Regina Jeffers, however she was finally convinced to spend dessert with us so that we could celebrate her birthday. What a wonderful occasion for cake! Sunday brunch was spent  with most of our authors at The Emory. For this meal, my family and I sat with Jennifer Petkus and  Amy Pacifico Cecil accompanied by her niece Heidi. Jennifer Petkus had previously intimidated me but I found her to be very cordial and highly entertaining. Darcy jokes told by a Darcy fan! What could be better?

Before my family and I had to get back in the car to travel home, I was introduced to William Deresiewicz. I had been a fan of his for quite sometime although learning of his book, "A Jane Austen Education" came as a surprise to me. How did I miss that? William pulled me into conversation and made me feel like I was the fascinating one! We did not have the chance to finish our conversation, but I have high hopes for our future friendship.

As I sit and reflect on my time at The Decatur Book Festival, I have a hard time remembering why I was so apprehensive of going. The authors were simply devine. They made me feel like I belong in a way that I have never felt before. Thank you Barbara Tiller Cole, Jack Caldwell, Regina Jeffers, Abigail Reynolds, Colette Saucier, Jennifer Petkus, Amy Pacifico Cecil and William Deresiewicz for making this a memorable weekend.


Evie Cotton is the owner of The Nail Suite, a nail salon that was recently voted "Best of in Beauty" by Living Social Cincinnati. Although her book titled "The Story of Us - A Unique American History" has nothing to do with Jane Austen, she is obsessed with everything Austen and has plans for future "Austenesque" endeavors.
Posted by Barbara Tiller Cole at 11:32 PM