Laura Dabundo: Faith in the Time of Jane Austen

Welcome Dr. Laura Dabundo to Darcyholic Diversions!
(and the Continuing Countdown to the Decatur Book Festival...
26 Days to Go!) 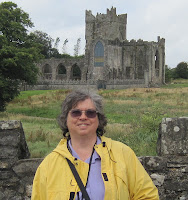 Hi, Darcyholics!  Today, I would like to introduce you to Dr. Laura Dabundo, a professor at Kennesaw State University.  She is one of three non-fiction authors who will be participating in the Decatur Book Festival. Her book, The Marriage of Faith: Christianity in Jane Austen and William Woodsworth will be available for sale during the festival and she will be doing a book reading a book signings during the event.  I look forward to geting to know her a bit better here, as well as at the book festival over Labor Day weekend.

And I am Announcing initial plans for a Darcyholic Holiday eBook Festival.  More Information to come, but send me an email at barbaratillercole@gmail.com if you are an author and would like to participate!!

If you have not read all of the posts for the month of June, there are still seven authors with open drawings.  Check out the archives on the right and read posts from Amy Cecil, William Deresiewicz and Maria Grace and leave a comment.  (On the other June posts, I will be choosing he winners later today and posting them later this week).


Faith in the Time of Jane Austen

Jane Austen wrote three prayers which have been published posthumously. On the surface, they seem to invite us to hear a speaker seemingly a world away from the beguilingly ironic and wise narrator of the novels.  Yet, I would like to suggest, maybe the speaker is not so different after all?

Give us grace almighty Father, so as to pray as to deserve to be heard, to address thee with our hearts, as with our lips. Thou art everywhere present, from thee no secret can be hid.  May the knowledge of this, teach us to fix our thoughts on thee, with reverence and devotion that we pray not in vain.
May we now, and on each return of night, consider how the past day has been spent by us, what have been our prevailing thoughts, words and actions during it, and how far we can acquit ourselves of evil.
Have we thought irreverently of thee, have we disobeyed thy commandments, have we so neglected any known duty, or willingly given pain to any human being? Incline us to ask our hearts these questions oh! God, to save us from deceiving ourselves by pride or vanity.
Give us a thankful sense of the blessings in which we live, of the many comforts of our lot; that we may not deserve to lose them by discontent or indifference.
Hear us almighty God, for his sake who has redeemed us, and taught us, thus to pray.
Amen. 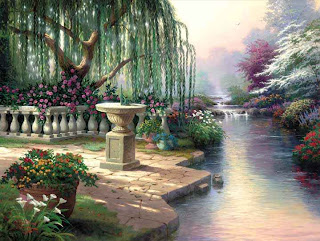 Using the concepts of the prayer, we can see that the novels parade before us people who are prejudiced and proud (say, Elizabeth Bennet, Fitzwilliam Darcy, Lady Catherine De Bourgh); who are selfish and cause pain to others because of that (consider John Willoughby, George Wickham, Lucy Steele, Mrs. Norris, General Tilney, et al.); who neglect their duties (as parents, think of Mr. Bennet; as property owners, think of Sir Walter Elliot); who are vain (Caroline Bingley, Fanny Dashwood, etc.)—my cup runneth over with instances in Jane Austen’s novels of characters whose behavior would indicate that they have transgressed God’s commandments! And I have not even mentioned the explicit violators of the Decalogue, the seventh commandment  betrayed by Maria Rushworth and Henry Crawford. There may not be murder in the novels, but for virtually every other sin and evil of the human condition Jane Austen’s novels are well represented, leading up to what is the epitome and acme of them, as her prayer shows in the third and fourth paragraphs, above, self-deception, discontent, and indifference. Characters delude themselves; they are dissatisfied with their plights and seek the vanities of the world to pass the time and entertain themselves and distract them from the morality of their putative faith.

The form of this prayer—that is, of both the directives of the devotion, its instructions, and the act of the suppliant herself, the pray-er, in the act of praying—calls for self-scrutiny, self-reflection, self-discovery. Austen’s novels display the actions that culminate in these states of separation from the divine denoted by the prayer, self-deception, restlessness, tedium, and boredom, and her prayer here offers a path away from those states through gratitude and  submission to the all-knowing deity. Being omniscient, God already knows everyone’s human frailties and failings, so the task for the Christian becomes an imperative to acknowledge  personal shortcomings  to oneself before the Almighty who offers salvation.
And in Austen’s novels, those characters whom I listed above either are directly challenged and in some ways punished for their waywardness at the ends of their novels or, like Elizabeth and Darcy, are reformed and rewarded. In other words, the prayer offers a counterplot to the novels, a subterranean way through faith and practice to a happy ending. It is a parable of the Gospel experience.
All three prayers of Jane Austen’s prayers seem to me to be similarly wonderfully rich and suggestive of a profoundly Christian believer and practitioner, and I think we need barely to scratch the surface of the novels in order to find that selfsame pattern. 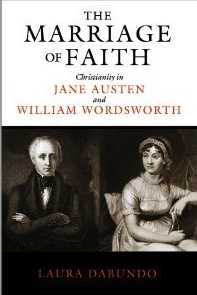 I shall be at the Decatur Book Festival to meet you and everyone who loves Jane Austen. If what I have written here is of interest to you, I bid you to look at my new book, THE MARRIAGE OF FAITH: CHRISTIANITY IN JANE AUSTEN AND WILLIAM WORDSWORTH, just published by Mercer University Press, for more on these themes, which will be available for sale at the JASNA-Atlanta booth. See you then!