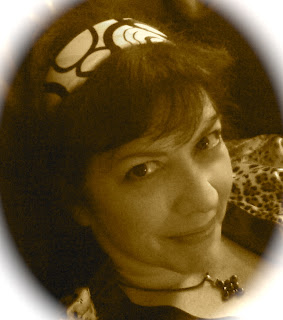 Hi, Darcyholics!  The world of Darcyholism has introduced me to many charming characters and helped me make many new friends.  Bonnie, I discovered on Twitter!  So how did a 'Beatrice' loving journalist become a school teacher indoctrinating the next generation into her Darcyholic ways?  Read today's post to find out why!

In addition, I am honored to be a part of the 'Authors in Bloom' Blog Tour.  I invite you to read MY post 'Take That Leap of Faith'.  For other blogs a part of the give aways see the links on the left side of my blog. 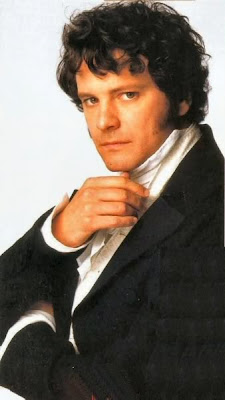 Comments on Bonnie’s post will be entered into our April monthly drawings.   Entries will be based on comments on blog posts; but additional chances will be given for joining this site, tweeting this post, Joining this site as a member!, sharing this on Facebook or your blog, Friend me on Facebook, clicking 'like’ on Barbara Tiller Cole, Author's Facebook page, Join Darcyholic Diversions Facebook Page or following BarbTCole on Twitter. 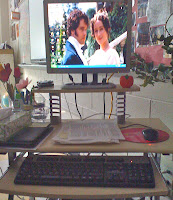 Pride And Prejudice.  Every time I hear those words I am overcome with the same feeling of delight I experienced the first time I read the book.  I swoon over Darcy and relish Elizabeth’s witticisms, laugh at Mr. Bennet’s sarcasm and groan over Mrs. Bennet’s nonsensical rants. I even named my favorite pomeranian Mr. Darcy despite the fact that he was obviously a Bingley. And as a lover of irony, I have to appreciate that my own pride and prejudice for years kept me from enjoying Jane Austen’s masterpiece.

You see, when I was a teenager it was my sister’s favorite book.  Although only 13 months separated us, we did not then share a relationship anything like that of Jane and Elizabeth. Always competitive, we were eager to establish our characters as very much distinct from one another.  If she liked P&P, it obviously was not for me!  Thus, like Caroline Bingley, I pursued a course that hurt no one but myself by carefully avoiding Jane Austen. 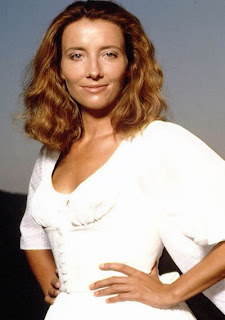 When my sister was 15 her heroine and role model was Elizabeth Bennet.  Mine was Beatrice from Shakespeare’s Much Ado About Nothing.  While my sister basked in the admiration and adoration of teenage boys, I scared them senseless.

For another 15 years I avoided Austen, finally breaking down and reading P&P in 1995 when I saw an advertisement for the BBC/A&E mini-series.  Needless to say, the combination of reading the book and watching what I still considered the quintessential film version of P&P had me hooked.

In quick succession I read each of her novels, then her letters, then her juvenilia, followed by every biography I could find and every non-fiction volume available that covered Regency England.  I now have a collection that takes up several bookcases in my home and includes multiple copies of Austen’s works as well as numerous biographies and scores of sequels and adaptations. I even have the Jane Austen action figure complete with writing desk and her very own miniature copy of P&P. 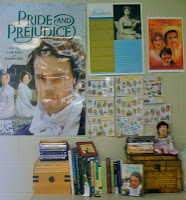 Countless times I have returned to her stories, but P&P with its feisty heroine and stoic hero remains by far my favorite. Darcy never loses his appeal nor does the clever irony lose any of its brilliance.

When I left my career as a journalist to teach high school English, I decided my students should not wait until the ripe old age of 30 to enjoy Austen’s irony and rich characters. It has become such a stock part of my curriculum that I have students at the younger grade levels come to me saying they can’t wait to be in my class and read Pride And Prejudice. 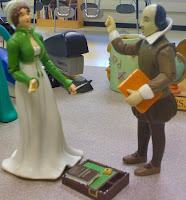 Meanwhile, age and wisdom have worn the edges of the Beatrice-like wit I honed since high school, and I find myself more and more resembling her more mellow literary counterpart, Elizabeth Bennet.  If only I’d known then what I know now, many a high school boy would have left their teen years behind unscathed by the rapier wit and ridicule of Beatrice, and I may have found my Darcy much sooner!
Posted by Barbara Tiller Cole at 12:08 AM