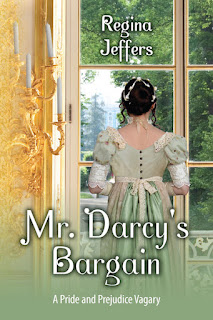 (I am happy to welcome Regina back to Darcyholic Diversions.  Please read till the end for details about her give away... BTCole)

In writing my latest Austen-inspired vagary, Mr. Darcy’s Bargain, I researched LOTS of scams of the Regency era. One of the most prolific of those who practiced a scheme to defraud others was a Scot named Gregor McGregor. 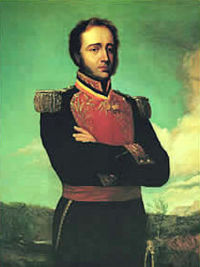 Gregor McGregor was a late Georgian era swindler, who was profited at the hands of his many investors. He was more than a bit narcissistic, even going so far as presenting himself the title of “Sir” and of Grand Cazique (Prince) of Poyais. So how was McGregor the ultimate pitch man? He persuaded people to invest in a country that did not exist.

According to The Big Picture, McGregor joined the British Royal Navy in 1803. He fought under Simon Bolivar in Florida in 1817. “During the Napoleonic Wars, Spanish control over its South American colonies weakened and the colonists in those countries fought for their independence. Between 1809 (Ecuador) and 1825 (Uruguay), all of the South American countries gained their independence from Portugal and Spain. However, countries need money, and the local tax base was limited. Most of the South American countries had mines that produced gold and silver, so in the early 1820s, Argentina, Brazil, Chile, Colombia, Peru and other countries issued bonds that were backed by their new governments. Local mines issued stocks making promises of large profits to investors. This led to one of three bubbles on the London Stock Exchange in the early half of the 1800s: the Canal Bubble of the 1810s, the South American Bubble of the 1820s, and the Railroad Bubble of the 1840s. In the midst of this investment mania came Gregor McGregor who sold bonds and anything else he could muster in his mythical country of Poyais.” 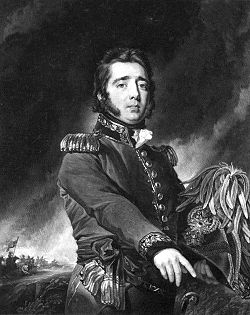 When McGregor returned to London in 1820, he spread the tale of his being made a Prince of “made up” 12,500 square miles’ country was located on the Bay of Hondoras and was given to him by a native chief, King Fredric Augustus I of the Mosquito Shore and Nation. In truth, during a night of heavy drink, King Frederic Augustus signed over a piece of land surrounded by uninhabitable jungles and no fertile land, gold or silver mines, etc.
Poyais. He told all who would listen how the

So, how did McGregor convince his investors that this land was everything that it was not? McGregor wrote and published a book under the name of Captain Thomas Strangeways. In the book, Sketch of the Mosquito Shore, the fictitious Strangeways describes a land of “milk and honey”: gold mines, fertile land, a country with a democratic government, natives willing to work for a fair day’s pay, a capital called St. Joseph (supposed founded by English settlers in the 1730s), small towns with banks and mercantiles, and a small military force for defense. [The book can be found on Google for a free download.]

“For the rich he offered 2000 bonds at £100 each on October 23, 1822, which resulted in £200,000 in sales. The bonds were offered at 80 and paid 3% interest. For the poor, he offered land for sale at the rate of 3 shillings, 3 pence per acre (later 4 shillings), which was about a day’s wages in 1822, therefore it appeared to be a very attractive investment. He sold places in his military, the right to be shoemaker to the Princess, a jeweler, teacher, clerk or other craftsmen in his non-existent government and country. In fact, he even issued his own currency which the settlers could use once they arrived in Gregor McGregor’s El Dorado.

“The Poyaisian Legation to Britain opened offices in London, and land offices were opened in Glasgow, Stirling and Edinburgh to sell land to his fellow Scots. Gregor McGregor had a group of people who promoted and sold all the land and other Poyaisian goods, sharing the profits with McGregor. By 1823, Gregor McGregor was a multi-millionaire in today’s terms.” (The Big Picture)

Darcy and Elizabeth are about to learn how “necessity” never makes a fair bargain.

When ELIZABETH BENNET appears on his doorstep some ten months after her refusal of his hand in marriage, FITZWILLIAM DARCY uses the opportunity to "bargain" for her acceptance of a renewal of his proposal in exchange for his assistance in bringing Mr. George Wickham to justice. In Darcy's absence from Hertfordshire, Wickham has executed a scam to defraud the citizens of Meryton, including her father, of their hard-earned funds. All have invested in Wickham's Ten Percent Annuity scheme. Her family and friends are in dire circumstances, and more importantly, Mr. Bennet's heart has taken an ill turn. Elizabeth will risk everything to bring her father to health again and to save her friends from destitution; yet, is she willing to risk her heart? She places her trust in Darcy's ability to thwart Wickham's manipulations, but she is not aware that Darcy wishes more than her acquiescence. He desires her love. Neither considers what will happen if he does not succeed in bringing Mr. Wickham before a magistrate. Will his failure bring an end to their “bargain”? Or will true love prevail?

As they entered the sinfully luxurious theatre lobby, Darcy could not disguise the smile of satisfaction upon his lips. Elizabeth Bennet was on his arm, clinging to him as if she feared exposure as a fraud. Soon, he thought. As my wife, Elizabeth will know the respect of all.
When he called upon the Gardiner household for the evening’s entertainment, her relations greeted him cordially, but it was Elizabeth who fascinated him. She wore the same gown as she wore at the Netherfield Ball, but somehow she no longer appeared as a fetching girl, but rather a woman in full bloom. His body recognized her in a purely male manner. Mine, it announced. It was all he could do not to flip Elizabeth over his shoulder and carry her off to some place private. As they crossed the lobby, he noted more than one head turned in their direction. He rarely was seen about Town with any lady in his protection, and Darcy knew tongues would be wagging on the morrow. For a change, he was glad of it. Having Elizabeth connected to him was what he desired.
“Darcy!”
He turned to observe the approach of his aunt and uncle. If he had known the Matlocks were in London, he would have chosen a different venue for the evening’s entertainment.
“Your lordship.” He led his party in proper acknowledgements. “Countess. I did not realize you were in London. If so, I would have left my card.”
“Matlock held business with his solicitor,” Darcy’s aunt explained, “and I took advantage of the colonel being at the family Town house to usher me about Bond Street.”
“I am certain my cousin enjoys the additional company,” Darcy said judiciously.
When the conversation began, he nudged Elizabeth closer so she could not bolt. He noted the hitch in her breathing and the quickness of her pulse at the base of her neck, but her chin rose to meet the Matlocks’ close scrutiny. She possessed a sort of vulnerable temerity that fascinated him.
The earl’s eyebrow rose in curiosity. “Perhaps you might make the introductions.”
Darcy noted the stiffness in Elizabeth’s shoulders. “Certainly,” he said while cupping her hand on his arm with his free one. “Your lordship. Countess. Permit me to give you the acquaintance of Miss Elizabeth Bennet and her aunt and uncle, Mr. and Mrs. Gardiner.”
“Miss Bennet?” The countess rolled the name about as if to taste its familiarity. “The colonel spoke of a Miss Bennet who was a visitor at Hunsford Cottage some months removed. Are you one and the same?”
Elizabeth’s voice held her apprehension, but she managed a sensible response. “Yes, your ladyship. I had the pleasure of taking Colonel Fitzwilliam’s acquaintance when he and Mr. Darcy shared the quarter days with Lady Catherine and Miss De Bourgh.”
“I did not know you continued the acquaintance, Darcy,” Lord Matlock remarked in chariness.
“I took Miss Bennet’s acquaintance several months prior to her sojourn with her cousin, Mr. Collins. The lady’s father is a gentleman from Hertfordshire and holds the nearest estate to the one Mr. Bingley means to purchase. At present, I am conducting business with Mr. Gardiner and Mr. Bennet.”
“I see,” Matlock pronounced suspiciously before changing his tone. “We should not keep you from your seats.”
Darcy executed a bow of respect. “Georgiana will join me at Darcy House tomorrow. Please feel free to make Miss Darcy part of your next outing to Bond Street. It would do my sister good to spend more time with our mother’s family. Miss Darcy has excelled at school this term. You will find my sister’s progress exemplary.” More than speaking the truth of his sister’s accomplishments, Darcy meant to draw attention from Elizabeth.
“I will send a note around tomorrow,” the countess announced.
With another bow of respect, Darcy directed his party toward the staircase.
“No mention of our bargain, Mr. Darcy?” Elizabeth inquired softly.
“We agreed to a measure of secrecy for the time being,” he replied in hushed tones. “If I announced our betrothal to Lord and Lady Matlock, every household in London would be abuzz with the news tomorrow. But know that I mean to have you to wife, Elizabeth. If you have not done so previously, it might behoove you to use this time together to acclimate your thoughts to the idea.”

The Fraud of the Prince of Poyais on the London Stock Exchange ~
https://www.globalfinancialdata.com/news/Articles/Poyais_article_v2.pdf

LEAVE A COMMENT BELOW TO BE ENTERED IN THE GIVEAWAY FOR AN eBOOK OF “MR. DARCY’S BARGAIN.” THE GIVEAWAY ENDS AT MIDNIGHT, EST, NOVEMBER 22, 2016.

Posted by Barbara Tiller Cole at 6:09 AM