A Visit with Amy Patterson of Jane Austen Books 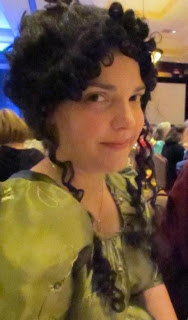 I’d like to start by saying how grateful I am for Barbara’s invitation to Darcyholic Diversions. I am glad to be a part of anything that celebrates the world’s greatest literary hero. In fact, I can’t remember a time in my life when Mr Darcy wasn’t a part of it. Truth is, I was about three years old when my mother first read Pride and Prejudice to me and my older sister. Every now and then she’d stop for the big words, or for our big bedtime yawns, but we were captivated. It was only the first in the series of classics she read us – I also remember Huckleberry Finn and Swiss Family Robinson – but Pride and Prejudice was the one we would ask for again and again.

My mother was also a young woman when she first read the book, albeit as an “Abridged Classic,” and aged eleven instead of three. She read the whole thing, put it down in anger – “How could she marry that horrible man?!” – then read it again from start to finish. The second reading showed her that she, like Elizabeth, had misunderstood Darcy’s character. One of Austen’s tricks is luring us into a false confidence in her narration, putting us at the mercy of the same prejudices as her characters. For the first-time reader, it’s easy to assume Darcy’s Netherfield barbs about reading are a jab at Elizabeth, instead of a subtle poke at Miss Bingley’s lack of enthusiasm for literature.

Naturally, most of this was lost on me as a small child. I loved the illustrations in the book, the inset title on the front cover. I remember falling asleep to the steady rhythm of Austen’s balanced prose, with her characters - as Hugh Thomson’s black and white drawings - dancing through my head.

Of course, nothing is more advantageous to a young woman than a healthy literary fantasy world. Our home was host to several, but the world created by Austen's writings was the one that brought the three of us - my mother, sister, and I - closest together. We shared a secret language that no one, not even our dad, could really figure out. From a young age, I knew I was a "Marianne," I knew the vagaries of English entailment laws, and most importantly, I knew the measure of a good man was how well he stood up to his personal and familial demons to fight for the woman he truly loved. 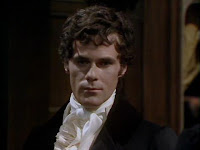 The three of us wore out our VHS copy of the 1980 BBC Pride and Prejudice years before Colin Firth splashed his way across our TV. Every few months we’d stay up all night munching on cheese and crackers - giggling, heckling, and cheering our way through all four and a half hours of Fay Weldon’s delightful dialogue.

But our private little Austenian triumvirate wasn’t destined to last. My mother spent a few years picking up some college courses here & there, after work and on the weekends. She discovered one day, quite by accident, that her English professor had helped found a Cleveland branch of the Jane Austen Society of North America. (JASNA ONC) Suddenly Jane was no longer our family friend, she was a quietly growing worldwide phenomenon whose wave we’d just managed to ride a bit earlier than some. She was also finally an object of serious critical study, which delighted my mother, who had sat through college English courses wondering when they’d bring up Austen, and being disappointed almost every time.

Through the 1990’s our local JASNA region cultivated our love for Austen with lectures, dances, tours, and wonderful publications. My mother’s shelves filled up with books by authors like Maggie Lane, Brian Southam, David Selwyn, and Juliet McMaster. I dressed up as Jane Austen in 6th grade (although nobody but my teacher knew who she was), and I proposed extra-credit presentations on Pride and Prejudice to give to my high school English class. At the time I didn’t realize just how big a role Jane Austen played in my life, even when I ran off for a few years to study Engineering and ended up with a husband instead.

So, with all of this love for Jane Austen, it was rather fitting that one day I’d end up making my living selling her books and writing about her, even if it took several years and several coincidences to bring it about. And in the end, it was another accidental conversation, like the one with my mother’s English professor, that brought me to my current profession. My mother called to place an order with Jane Austen Books - probably for some more critical studies - and heard the devastating news that the owner no longer felt she could run the store! And worse - she couldn’t find anyone who would buy it and keep it running as Jane Austen Books - any offers she had received were from people planning to fold her collection into their own.

I don’t really know what possessed us to offer a friendly buyout of the store, other than a charming lack of knowledge of what our work as bookstore owners would entail. But we learned quickly, and we love what we do. My mother’s small collection of Austen’s works, critical studies, and other odd, imported, or just plain fun Austen-related books has now been dwarfed by the collection of 10,000 or so more in her basement, but each one is special to us. 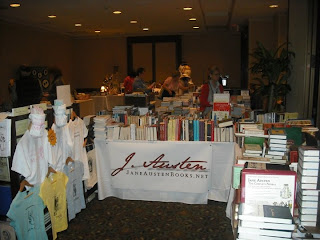 My sister and I especially have been steeped in Austenania almost our entire lives, and Jane Austen Books is just a continuation of our lifelong Austen obsession. It’s also a chance for us to meet wonderful people - authors, scholars, fans, and everyday readers - who we might not otherwise know. Our children have an international fan club of people who receive our catalogs, or who have seen them dancing in costume at an AGM. We have been very lucky that a series of happy coincidences allowed us to step into a world of which most casual fans aren’t aware. 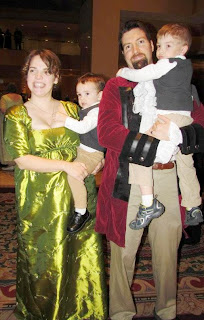 For the little girl who wanted nothing better than to hear Elizabeth put Lady Catherine in her place, and whose first real “idol” was on a printed page instead of a TV screen, my profession couldn’t fit much better than it does right now.

Check out Jane Austen Books to learn more about Amy and books available from her.
Posted by Barbara Tiller Cole at 7:57 PM