C. Allyn Pierson: Jane Austen and Me, a Memoir

Jane Austen and Me, a Memoir 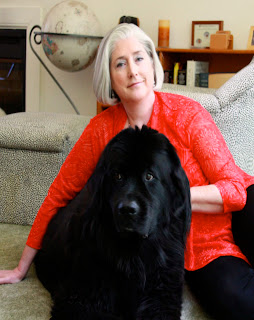 I am very happy to have C. Allyn Pierson visiting with us here today.  Here she is posing with her Newfoundland, Muzzy, better known to some as 'The Beast'.  As he is in both of her books, it is only fair that you get to meet both of them today!

C. Allyn Pierson will be giving away a copy of Mr. Darcy's Little Sister to a lucky winner.  Commenting on this post will enter you into the drawing along with:  joining this site, tweeting this post, joining this site as a member via Google Friend Connect (GFC) (See the left hand column on the blog to join!), sharing this on Facebook or your blog, Friend Barbara Tiller Cole on Facebook,  clicking 'like’ on Barbara Tiller Cole, Author's Facebook Page.

My loving and intimate relationship with Jane Austen began 22 years ago and was highly dependent upon several chance occurrences. My husband and I are both physicians and our younger son has autism. When he was young childcare was a problem- he needed extra attention and our older son needed care as well. I tried hiring nannies that would come in during the day (we did not have room for a live-in nanny), but was very disappointed with them. It seemed that all the professional nannies left Iowa to work in California and New York, where there were more people who hired live-in nannies and where they could see some of the world. The ones who stayed behind seemed to regard childcare as a job suitable for someone who was uneducated, untrained and therefore unable to get a job that did not involved flipping burgers. Sorry, not what I wanted for my children.

By the time my younger son turned three we were just finishing up building our dream house, and we included a bed-sitting room on the lower level for an au pair. For those of you who are unfamiliar with au pairs, it is a cultural exchange program administered by the US government that allows foreigners, usually from Europe, to come to the US for one year to do childcare. The program requires that the au pairs not work more than 40 hours a week, they must get 6 credit hours of college level classes while they are here and they must be between ages 18 and 26.  We were able to hire a much higher quality of babysitter through the au pair program and also had the fun of meeting people from England, South Africa, and Latvia over the course of 15 years.