Karen Wasylowski: It All Began with a Battle Over The Remote

Karen Wasylowski: It All Began With a Battle Over the Remote 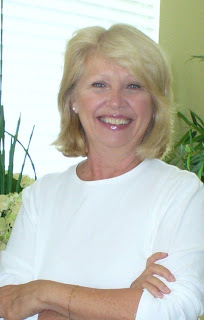 I am very happy to welcome Karen Wasylowski to Darcyholic Diversions today as she discusses her most recent release, Sons and Daughters.  Karen is offering a copy of her book (either eBook or softcover--the winners choice) to one lucky reader.  Your comment enters you into the drawing.  Additional entries for becoming a Google Friend Follower of this blog, tweeting this post, Liking Barbara Tiller Cole on Facebook, or sharing this on your facebook wall.

A sequel to her book
DARCY AND FITZWILLIAM
(1 February, 2011)

Which was a sequel to Jane Austen’s
PRIDE AND PREJUDICE
(28 January, 1813)

“The most important thing a father can do for his children is to love their mother."
-- Theodore Hesburgh, Catholic Priest and President Emeritus of the University of Notre Dame

It began seven years ago now.  I was watching “Pride and Prejudice” on television and my husband was nagging me to write – something – anything to get the remote back.  Well, we were living in Florida (and still are) and I was bored to tears, so I easily tuned him out and began to fantasize about the movie I had just seen and perhaps what would have happened to all the pretty people.  After all, Pride and Prejudice is really just a simple family story about sibling rivalries, young love, hopes and dreams.  No monsters – no homicidal maniacs living in the attic (although, it does have its share of crabby aunts, beleaguered fathers, ditzy mothers, sisters, cousins, friends)…

You can see I was really, really bored in those days; I had a lot of time to sort this all out.

Pride and Prejudice, to me, is the beginning of this family saga.

DARCY AND FITZWILLIAM was published in February of 2011.  I had picked up the tale of Darcy and Lizzy shortly after their marriage when they are starry eyed newlyweds, still struggling with her annoying mother and father, her sisters, his horrid aunt.  The Colonel comes back into their lives then, returned from Waterloo, a man with no purpose, no direction – no money.  He has nightmares, mood swings; he has seen too much death, too many atrocities; and, he has been living a rather debauched lifestyle.  I envisioned him as a man opposite to Darcy in many ways.  Where Darcy was meticulous, elegant and urbane, Fitzwilliam is a rogue, a fashion disaster, a rascal.  Where Darcy has the huge responsibility of Pemberley thrust upon him at a young age, Fitzwilliam is a second son, so nothing is expected of him – except to marry well.

My first book followed the men as they learn to live with the women they love and eventually become fathers.  They make some mistakes along the way, as we all do, but they are loved enough to be forgiven.  But the story was not over yet – it couldn’t be –
I wasn’t ready to let go of my boys. 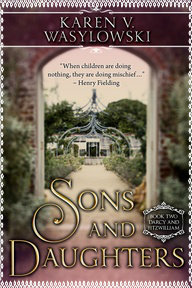 SONS AND DAUGHTERS (Book Two of Darcy and Fitzwilliam) was published October 2012 and I was able to continue my family saga.  It begins five years after the ending of DARCY AND FITZWILLIAM.  The men are in their thirties and have young children now, their marriages are older and more settled, familiar.  And, like all married men, their responsibilities have doubled.  Every decision they make now affects many lives; people they love deeply depend upon them to choose what is best for their futures – each man faces unique challenges to his character.

Then there are the children – my favorite part – the “Fitzwilliam Mob” of brothers, sisters and cousins growing up together, almost as one unit.  At first they are seen as little children, adoring their fathers, finding their voices, forming alliances.  Driving their parents insane...

Then they are adolescents – discovering fathers are human after all, struggling to break free and assert their own identities, becoming sexually aware, questioning authority.  Driving their parents insane…

Then they are adults – falling in love, becoming heartbroken, fearing to disappoint their parents and yet willing to stand on their own, make their own choices, their own mistakes.  Driving their parents insane…

Some things never change, no matter what the era.