Welcome Abigail Reynolds (Another of the 27 Authors Participating in the Upcoming Decatur Book Festival) to Darcyholic Diversions...
22 Days to Go till DBF!) 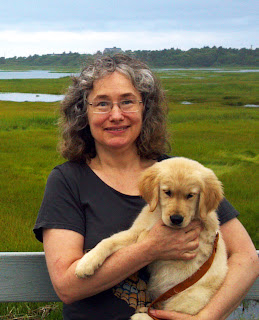 Hi, Darcyholics!  Today, we have Abigail Reynolds back to visit with us.  She is posing here with her new puppy.  She has a special give away of a proof of a yet to be released book that is a SPECIAL GIVEAWAY with an AUGUST 15TH deadline!  I look forward to geting to know her as she is going to be at the upcoming Decatur Book Festival! And she, Regina Jeffers and William Deresiewicz will be presenting on the City Hall main stage at 5:00 pm on Saturday, September 1 during the festival.

Upcoming Guest Posts Are As Follows:
August 12--Cynthia Hensley
August 14--Colette Saucier
August 17--Regina Jeffers
August 19--KaraLynne Mackrory
August 21--Sally Smith O'Rourke
August 24--Pamela Aidan
August 26--Reposting Decatur Book Festival Author Links!
August 28--Jack Caldwell
August 31--Decatur Book Festival Eve!
September 2--Live from the Decatur Book Festival
September 4--Fun Stories from the DBF
September 7--Jack Caldwell's Experiences at the DBF
September 11--Karen Cox's Experiences at the DBF
September 14--Mary Simonsen
September 18--Amber G.
September 21--Moira B.
November 2--Amy Patterson
November 13--Karen Doornebos
And Many more to come!
&*&*&*&*&*&
Abigail is giving an advance copy of Mr. Darcy's Refuge.  As this is a special give away, it will not be a part of the regular monthly give aways as I want someone to win it before it is actually released!  So the drawing for this will be on Wednesday, 8/15/12.  Comments count as entries, but additional chances will be given for joining this site, tweeting this post, joining this site as a member via Google Friend Connect (GFC) (See the left hand column on the blog to join!), sharing this on Facebook or your blog, Friend Barbara Tiller Cole on Facebook, clicking 'like’ on Barbara Tiller Cole, Author's Facebook page, Join Darcyholic Diversions Facebook Page or following BarbTCole on Twitter. 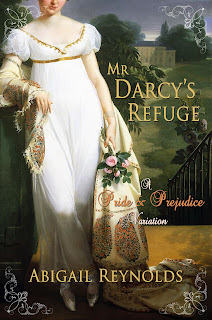 It’s been a hot, dry summer in Wisconsin this year.  The grass is brown, plants have died, and no one talks about anything but the heat.  Fortunately for me, I have my own private escape from the extreme weather.  My mind has been living in the cool, rainy weather of my new book, Mr. Darcy’s Refuge.

Here’s a little real-life weather history during the time-frame of Pride & Prejudice. The winter of 1811 was exceptionally cold in much of England.  The Thames froze over completely in February.

‘A Frost Festival on the frozen Thames in February, 1811’
There were severe rainstorms throughout the spring.  While I was unable to find records of specific floods during the early 19th century, the Kentish rivers frequently overflowed their banks.  Wikipedia tells us that “The middle section of the [River] Medway above Tonbridge, because of the many tributaries entering the river in this stretch, has always been subject to extensive flooding. The town itself has suffered frequent flooding over the centuries - so much so that the higher part of the town to north is called Dryhill.”  So Darcy goes to Hunsford in early April of 1811 to propose to Elizabeth Bennet when rivers had been iced-over as late as February, storms were frequent, and rivers prone to flooding.  What more could a writer of Pride & Prejudice variations ask for?

Jane Austen tells us that the Hunsford Parsonage is separated from Rosings Park only by a lane, but what fun is that?  I decided that one of the narrow Kentish rivers would be a more interesting barrier.

That way a flood could strand Darcy at the parsonage with Elizabeth the night of his ill-fated proposal.  Not only that, but there would be lots of rain to keep them wet and cold.  That’s the scenario I explore in Mr. Darcy’s Refuge, which will be launched on September 1 at the Decatur Book Festival.
If you want a copy hot off the press, stop by the JASNA tent.  I’ll also be part of a panel on Saturday afternoon with Regina Jeffers and William Deresiewicz, but without the new book.  If you’re an audiobook fan, Mr. Darcy’s Refuge will be available in audiobook form within a few weeks of the launch, with my lovely five-star narrator Pearl Hewitt.  It’ll be on both Kindle and Nook sometime around September 1, depending on the vagaries of Amazon and B&N.
Or if you really can’t wait to find out what happens to our cold and wet couple, leave a comment on this post, because I have a proof copy of Mr. Darcy’s Refuge that’s already in my hot little hands, and I’m giving it away to one lucky commenter!
I hope to see lots of  readers at the Decatur Book Festival!

A Link to Abigail Reynolds Books on Amazon
Posted by Barbara Tiller Cole at 8:16 PM