A Dance With Mr. Darcy--Regina Jeffers 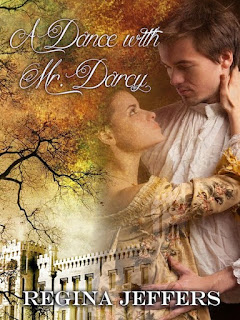 A Dance With Mr. Darcy

Darcyholic Diversions is happy to be hosting Regina Jeffers today as her newest book becomes available on March 25th.  She is giving away two ecopies of the book so read until the end for more information about how to win a copy.

There is the tradition of the formal betrothals known as “handfasting,” I used the idea of handfasting in my latest Austen-inspired piece, A Dance with Mr. Darcy. But what of the mythical handfasting ceremonies purported by popular literature?

In the late 18th Century, an idea arose in Scotland that “handfasting” did not refer to a betrothal, but rather a marriage of sorts where the couple agreed to live with each other for a year and a day ~ a trial of sorts ~ before deciding whether the marriage suited them or not. After the trial period, the couple could be married permanently or go about their separate ways.

In Thomas Pennant’s Tour in Scotland (1776), https://archive.org/details/atourinscotland03penngoog Pennant describes a fair he observed near Eskdale: “Among the various customs now obsolete, the most curious was that of handfasting, in use about a century past....there was an annual fair where multitudes of each sex repaired. The unmarried looked out for mates, made their engagements by joining hands, or by handfisting, went off in pairs, cohabited until the next annual return of the fair, appeared there again and then were at liberty to declare their approbation or dislike of each other. If each party continued constant, the handfisting was renewed for life.”

We must be cautious about Pennant’s tale for he was known to embellish, but is it not wonderful how the tale has manifested itself into modern times? Pennant, for example, claims that the handfisting practice came about for there were too few clergymen available. What he does not realize was that a clergyman was not necessary for a legal marriage in Scotland, i.e, the reason couples escape to Gretna Green for an elopement in many Regency romances. The Scottish border town held a reputation for being married over the “anvil.” Actually, most who escaped to Gretna Green were married in a civil ceremony by Mr. Robert Elliot, Anvil Priest (1814-1840), http://www.gretnagreen.com/robert-elliot-a758 but Pennant’s tale was the first of many rumors regarding the trial marriage known as “handfasting.”

From Sharon L. Krossa at Medieval Scotland, we find, “The next reference to "handfasting" as trial marriage is in The [Old] Statistical Account of Scotland (1791-99), v. 12, pp. 614-5, in a section dealing with Eskdale in Dumfries, which follows closely Pennant's description:

... In mentioning remarkable things in this parish, it would be wrong to pass over in silence, that piece of ground at the meeting of the Black and White Esks, which was remarkable in former times for an annual fair that had been held there time out of mind, but which is now entirely laid aside. At that fair, it was the custom for the unmarried persons of both sexes to choose a companion, according to their liking, with whom they were to live till that time next year. This was called hand-fasting, or hand in fist. If they were pleased with each other at that time, then they continued together for life; if not, they separated, and were free to make another choice as at the first. The fruit of their connexion (if there were any) was always attached to the disaffected person. In later times, when this part of the country belonged to the Abbacy of Melrose, a priest, to whom they gave the name Book i' bosom (either because he carried in his bosom a bible, or perhaps, a register of the marriages), came from time to time to confirm the marriages. This place is only a small distance from the Roman encampment of Castle-o'er. May not the fair have been first instituted when the Romans resided there? and may not the "hand-fasting" have taken its rise from their manner of celebrating marriage, ex usu, by which, if a woman, with the consent of her parents or guardians, lived with a man for a year, without being absent for 3 nights, she became his wife? Perhaps, when Christianity was introduced, this form of marriage may have been looked upon as imperfect, without confirmation by a priest, and, therefore, one may have been sent from time to time for this purpose.

This myth became even more widely spread after Sir Walter Scott used the imagery in his novel, The Monastery (1820).  https://en.wikipedia.org/wiki/The_Monastery The belief may have formed around the custom of couples meeting at large annual gatherings and taking the opportunity at the next annual gathering to marry or part. In the novel, which is set in mid-16th century Scotland, Scott has his main character speak of a trial marriage known as “handfasting,” thus giving credence that the ceremony held a history in Scotland. Scott’s popularity only added “depth” to the myth. W. F. Skene in his The Highlanders of Scoland (1837) speaks of a child born of a handfasted couple. If the woman gave birth or was with child during the trial, the marriage became legal. Skene even remarks that the Highlanders made a distinction between the legitmate sons, born from a handfasted union, and their illegitimate ones, born out of wedlock.

What is important to know of this expansion of the myth is that Skene’s tale stretches the practice of handfasting from the border region to the highlands. How the myth of handfasting began is still debatable, but one can find it perpetrated in academia and in fiction.

Handfasting is part of several plot points in my new Austen-inspired novel, A Dance with Mr. Darcy. Enjoy the excerpt below from this book.

Book Blurb: The reason fairy tales end with a wedding is no one wishes to view what happens next.

Five years earlier, Darcy had raced to Hertfordshire to soothe Elizabeth Bennet’s qualms after Lady Catherine’s venomous attack, but a devastating carriage accident left him near death for months and cost him his chance at happiness with the lady. Now, they meet again upon the Scottish side of the border, but can they forgive all that has transpired in those years? They are widow and widower; however, that does not mean they can take up where they left off. They are damaged people, and healing is not an easy path. To know happiness they must fall in love with the same person all over again.

Now for the Giveaway: I have two eBook copies of A Dance with Mr. Darcy available to those who comment below. The giveaway will end at midnight EDST on March 28.