Mr. Darcy! Why Him?: Nina Benneton 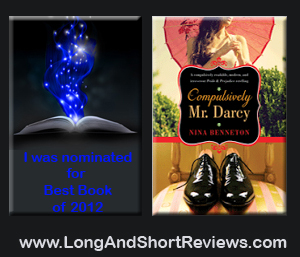 (So happy to have Nina Benneton with us today with a post during 'All For The Love of Darcy Month'.  Stop by HERE to enter for all of the wonderful give-aways this month, but ALSO comment on Nina's post for additional chances to win! Stop by MY POST for 'Hearts Through History Blog Tour', and don't forget to VOTE for Compulsively Mr. Darcy for Book of the year!)


“Mr. Darcy! Why him?” With a slight twitch of her nostrils to the right, a sign that she’s tittering between disdain and disgust, my anime-obsessed teenager asked me after she finished reading Pride and Prejudice for an English class recently. “I don’t see it. I don’t see why you love him so much you’ve even written a book about him.”

My daughter is into cosplaying anime characters. Through designing, sewing and then wearing and exhibiting her costumed creations, she brings to life the fictional anime characters. One of her favorite characters is Howl from the anime movie based on Diana Wynne Jones’s novel of the same name, Howl’s Moving Castle.

Just as I don’t see the attraction for the self-absorbed, lazy, coward Howl who makes Wickham appear like a choir boy, she doesn’t see my admiration for Mr. Darcy.

What should I tell a young teen what it was I learned at her age from reading Pride and Prejudice?

‘Don’t judge a guy by his manners.’

That’s it! Contrary to what every mother, including my own mother, and even myself, had often expressed, ‘Manners make the man’, I would tell my daughter the above. And I also would tell her:

That the most well-mannered, articulated, handsome guy every girl wanted may be a Wickham in disguise who has no heart.

That the most amiable, popular, peace-loving guy may be a Bingley who lacks self-conviction to follow his own heart.

That the most cultured, pedigreed, decorated-soldier guy may be a Colonel Fitzwilliam who lacks the courage to unfetter his heart.

That the ill-mannered, inarticulate, disagreeable, unpopular, undecorated guy you meet may be the Darcy with the unbridled, fearless, and selfless heart. A man who’s willing to admit his faults and overcome them is a powerful, authentic man, even without any wizardly tricks.

Judge a man by his actions, not his manners.

I’m going to find my daughter in her sewing room now and tell her all that.

Second, I’m also going to tell her I plan watch and reread Howl’s Moving Castle again. Perhaps I’d misjudged the wizard Howl by his manners and not his actions.

Lastly, I’m going to tell her that the book that was written from my love of Mr. Darcy is nominated for LASR Best Book of 2012 Poll, http://www.longandshortreviews.com/book-reviews/2012-book-of-the-year/ and that voting is until February 14th, and I’d love for her to vote for her mother’s Austenesque novel, Compulsively Mr. Darcy.

I would be so grateful for you all to vote for an Austenesque novel as the Best Book of the Year. http://www.longandshortreviews.com/book-reviews/2012-book-of-the-year/

As a thank you for your votes, one random lucky commenter will win an ‘I Love Mr. Darcy’ gift set (totebag, keychain, bumper sticket) from one of my favorite shops—the Jane Austen Centre in Bath.