The Why Behind the Bennet Wardrobe Books


The Why Behind the Bennet Wardrobe Books

(BTCole:  I am very happy to have Don Jacobson here with us again at Darcyholic Diversions.  Don has released the latest novella in his Bennet Wardrobe series.  Don will be giving away an copy of the his latest novella to a lucky commenter.
For any of you who missed his my interview with Don earlier this year, the link is:
Barbara Tiller Cole’s Interview with Don Jacobson) 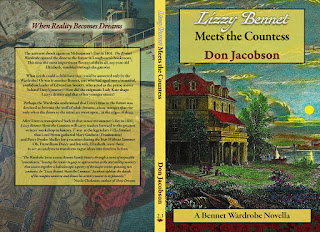 Sometimes I get way inside of my head. Usually it happens when I am trying to understand the motivation of one of the characters in a Bennet Wardrobe or Pride & Prejudice Variation novel/novella scrolling its way through my keyboard.
However, I also tend to do a lot of self-analysis…to try to better understand my own motivations.
In other words: why do I write?
Early in my life, I wrote to make a living. My first “real job” was as a wire service reporter in Chicago. Learned to get and tell the 4-1-1. Learned to write to deadline. Then I worked as a copywriter for both consumer and business products. Learned to understand and communicate the needs of both the clients and the users.
The one common question I had to ask as I was developing each of these efforts “Why?” Whether it was a victim of a car wreck, a perpetrator of a robbery, a company selling a 2-way radio, or a person looking to buy a forklift, I had to ask what would motivate them to take the action that would be under the microscope.
Asking why became a habit.
Of course, my parents would have asserted that I had an infuriating predilection to asking “Why” when they would have wished that I would have nodded!  When I began to deeply read JAFF in 2013…and to revisit the Canon…I found myself asking “Why” quite a bit. Not necessarily “Why did Austen sketch (insert character name) like this,” but rather “Why would (insert character name) act as he/she did?”
Of all of the novels (and I do dearly love Mansfield Park), Pride and Prejudice stands out as a masterpiece of caricature—prosy and bookish Mary, coughing and nervous Kitty, fun and (charitably) flirtatious Lydia, indolent and resigned Thomas, excitable and oblivious Mrs. B…and…well you get my drift. That evil child deep inside me clamored to ask Ms Austen “why?” But, of course I could not.
That brings me to the Bennet Wardrobe. This arose from my unconscious mind as a solution to whatever problems may have been holding back Mary, Kitty, Lydia, and Thomas. And, with the alterations in their personalities brought about by their understanding of their problems caused by their experiences in the future, what sort of persons would they become?
In The Keeper: Mary Bennet’s Extraordinary Journey, I took the opportunity to explore the roots of Mary’s difficulties and then her emergence from Austen’s trop-driven image. Ultimately, the moralist evolves into an activist for social justice. Of course, the Wardrobe intervened by sending a man from the 18th Century into her time in the early 19th. And then Mary took matters into her own hands.
Later, I considered why Kitty would retreat into coughing nerves even though she was a beautiful young woman of one of the leading houses in the neighborhood. Part 1 of the second volume of the Bennet Wardrobe, The Exile: Kitty Bennet and the Belle Époque, examines how the roots of Kitty’s personality were shaped as a six-year-old child.
I wrote Henry Fitzwilliam’s War before Belle Époque to explore the personality of a totally new character, one destined to become Kitty Bennet’s love interest, the Viscount of Matlock, Henry Fitzwilliam. The Wardrobe was integral in this.
Then there were questions about Thomas Bennet’s treatment of his children. Why would an obviously intelligent man begin to withdraw deeper into his own bookish self? The suggestion that he could not control his wife’s behavior, and thus withdrew into his bookroom to endure rather than shape seemed far too convenient for me.  While the current novella, Lizzy Bennet Meets the Countess, is primarily about one half of ODC, I chose to use her time travel as a way to suggest a possible reason for why Thomas Bennet acted as he did.
Subsequent volumes…The Exile: The Countess Visits Longbourn, The Avenger: Thomas Bennet and A Father’s Lament, and  The Pilgrim: Lydia Bennet and the Soldier’s Portion will explore resolutions for each of the title characters.
And, then there will be one final volume that will explore the motivations of the Wardrobe itself. The Grail: The Saving of Elizabeth Darcy will bring the saga of the Bennet Wardrobe to a close.
I hope that you will join me in the journey into the “Why” of it all.
Posted by Barbara Tiller Cole at 11:42 PM